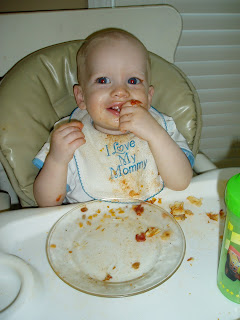 Have you ever been in Wal-mart or the grocery store and seen a mother shopping with her child riding in the cart? Have you ever looked closely at the child, noticed it had cookie crumbs on it's face or a snotty nose, and wondered how in the world that mother could just keep on shopping without cleaning up her grubby kid? Well, I have. Before I became a mom I used to vow I'd never let that happen to my child.
Famous last words....
Today I took Jack with me to the Humane Society to meet with the director. We meet once a week to go over financial statements and discuss the upcoming week. I usually put Jackson in his portable highchair and spend the entire meeting dividing my attention between shelter operations and bribing Jack with crackers. He was unusually fussy today so I was in a hurry to get out and I failed to wipe his face before I stuffed all his gear into his diaper bag and headed for the door. At that moment in walked a good friend, the former shelter director, whom I hadn't seen in several months. We chatted for a while and he picked up Jackson, who was running around the floor. As he was standing there holding Jack I got a closer look and realized he had teddy graham and drool smeared all over his face and hands.
I have become the mother with the grubby kid!
But he's sooo worth it!!

Anonymous said…
Wow Jackie, you're quite a writer! I enjoy reading your blogs about Jackson! Keep writing them. :) I can't wait to see you, Caleb, and Jackson in a month!
June 1, 2007 at 7:31 AM

Jackie said…
Philip, I'm so glad that you enjoyed reading my blog. We can't wait to see you either! I hope you and Jon and Mike will teach Jack some of your basketball skills this summer... :-) hehe
June 1, 2007 at 9:08 AM