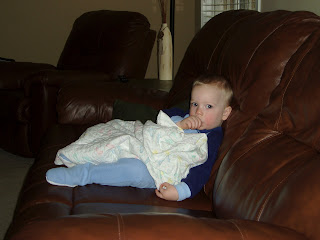 Hard to believe the blog has made it this far without a post about the beloved "Binkie". This is Jack's most loved blanket, without whom he does not sleep, watch cartoons (in the picture), or do any other activity that requires sitting still. I can't pinpoint exactly when Binkie became such a valued member of the household... but I knew it was so when Caleb and I realized one day that we had started unknowingly refering to the blanket as "he" and "him".
Jackson seems to grow more attached to Binkie everyday and this includes dragging him along all over the house, sometimes in the car, and occasionally trying to throw him in the bathtub at bath time. You would think the first analogy that comes to mind would be Linus and his blanket (from Charlie Brown), but instead I usually compare Jackson to Calvin (from Calvin and Hobbes); mostly because I remember Calvin spending many cartoons waiting for Hobbes to be finished "bathing" in the washing machine and dryer. After my first fiasco washing Binkie I quickly learned that the easiest method is to smuggle him into the laundry room while Jackson isn't looking. This works most of the time but occasionally, (like one day last week) I slip up and Jack gets reminded of Binkie before he is finished washing and drying.
Last Thursday Jackson happened to be standing in the laundry room doorway watching me transfer the wet clothes from the washer to the dryer. It had completely slipped my mind that Binkie was in the load and so I pulled him out and threw him in before I realized it. It was a tearful twenty minutes while Binkie underwent the express cycle and Jackson searched through every stitch in the laundry basket (leaving sheets and clothes strewn all over my floor) until we could rescue Binkie from the dryer. All is well now, thank goodness!

Anonymous said…
Mike and I have been debating what is going to happen now that Jonathan Caleb Hampton is in the family... will the blog include him, or perhaps a new blog will be made... or (Mike's idea) there will be a combined blog "Raising Jonson/Jackathan". We are biting our nails over here waiting to see what will transpire.
March 17, 2008 at 12:03 AM