Our playgroup met at Monkey Joe's last week. It was great to let the kids run out some energy, but these pictures were taken after Jackson consumed two juice boxes and a package of animal crackers at snack time. Luckily I was able to intercept all the cupcakes and cookies that came down the table in our direction and hand them on to the next mom without Jack knowing what he was missing. I can't imagine what nap time would have been like if I'd let him have all that sugar on top of the juice and crackers. 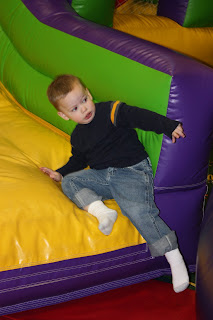 Of course, after that we had to take a bathroom break. As usual, I had Jonathan on my back so I had both hands free to help Jack, but it was still a tight squeeze in a confined space. Another mother from our group had followed me in the bathroom with two of her kids, both were potty-age so I was listening in on their conversation, curious to see how she would manage them both at one time. Soon the bathroom door swung open and another kid called "Mom? Mom?" She opened her door and suddenly had three kids in a space so small I could barely move to get Jackson's underwear back on. What a Super-Mom! What really took the cake, though, was when her fourth child came in and knocked on her door and I could barely contain my giggles when she ushered him in too and said, "Well, hello there, Jeffery! Welcome to the stall!" 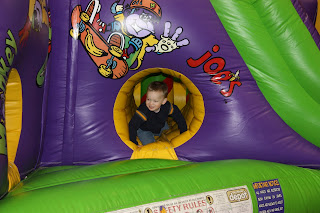