A Word About Sammy 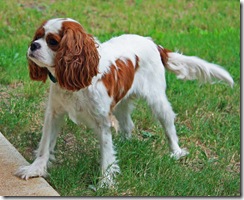 By now most know about Sammy’s accident on Monday morning, March 2nd, and that we were grieved to have him put down that afternoon. Now that we have had some time to adjust and recover, I’m reluctant to resume blogging without a post for Sammy.

It happened early Monday morning, the day after we had 5 inches of snow. There was still several inches on the ground and Sammy was in the front yard investigating after Caleb let him out to do his business.

We think he either slipped or was startled by something and fell down the slope. We heard him crying and rushed out to find him hobbling down to the front door. He was in a lot of pain and dragging his right rear leg.

At first we thought he had popped his knee out of joint-he had a known luxated patella in both back knees, worse in the right-but we quickly realized this was something much worse.

Caleb loaded Sammy into the car and I called the vet to let them know we were coming.

X-rays were in order and it was apparent Sammy would have to be sedated to be examined. I was sent home with the promise of a call as soon as the doctor knew something.

I got the call around noon. “It doesn’t look good,” Dr. Griffin said. “There’s something wrong with his spine.”

He couldn’t tell me exactly what was wrong without doing some more conclusive tests (injected dye and cat scan) but he conveyed to me how serious the problem was. The vertebrae was either fractured or compounded. A series of complicated surgeries was most likely needed, and there would be no guarantee Sammy would ever be a normal dog again. His right leg and tail were paralyzed and his left leg had limited mobility.

I hung up the phone in tears and called Caleb at work. Together we made the decision to have Sammy put down. I felt I was going to fall to pieces so Caleb took over and made the call to the vet. He left work early and was there to say goodbye to Sammy and bring his body home afterward. We buried him in the backyard.

It has been a hard week, especially when Jackson asks me where Sammy is, but we are doing better… moving on.

Below is the letter of sympathy I received yesterday: 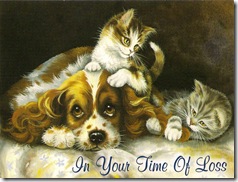 The decision you made for Sammy was a very difficult one that was both loving and humane. We hope special memories will surround you during this difficult time. Thank you for giving us the opportunity to care for Sammy and please let us know if we can help in any way.