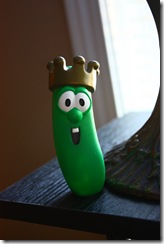 One day I was in the laundry room and I heard Jackson screaming “Mommy! Mommy!” from his bedroom (where he was supposedly napping). Thinking something horrid was happening, I raced down the hallway and flung open his door.

He held up a toy he’d found under the bed and said “Look, Mommy, a cucumber king.”

While I’m on the topic I thought should mention that Jackson loves to watch VeggieTales but he never gets very far in the movie before he wants to rewind and watch his favorite part - the theme song - again. He mimics the tuba playing perfectly, puffing out his cheeks and performing along.

Jackson doesn’t allow our ‘TV-less’ time to interrupt the tuba. I get asked to sing a dozen times a day but lately I’ve left it for Caleb. I think we all agree he makes a much better “Bob the Nado”.