I licked it, therefore it’s MINE

What better way to mark your territory than to christen it with a string of saliva? It’s genius, really. After all, who wants to touch your food after you’ve slimed it?

I remember this game very clearly from my childhood. The concept is simple. First to the table at meal time gets to pick which place they want to sit at, then seal the deal by licking the silverware and plate and whatever food is within reach.

Crude? Maybe slightly. Social unacceptable? Sure. But with three siblings in the running, how else are you supposed to secure the biggest dinner roll, the juiciest piece of fruit, or the fattest burger.

So you could say I had quite the feeling of déjà vu last week when I observed Jonathan sneak a cracker off Jackson’s plate, lick it, then quickly throw it back onto the plate. At that point Jackson screamed “HEY, I DON’T WANT THAT ANYMORE!!” and willingly slid it back across the table to a jubilant Jonathan.

I thought it may have been a one time occurrence, but I had another thing coming. Behold the block of cheddar* I left alone on the counter for two minutes last night while I rearranged boxes in the pantry.

*Note: This was an unblemished cheese when I left the kitchen 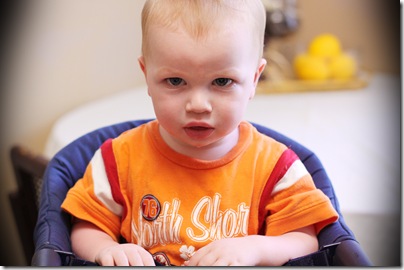 Guilty, or no? You tell me.

Aunt Mary said…
NOT guilty. Those are obviously Smurf bite marks on the previously unblemished cheese left on the counter. Did I catch a glimpse of Vulcan tooth marks on the side of the cheese? Did Spock escape the alien water world? Surely there were no spider bites on it...

NANNY said…
As the youngest of five, definitely guilty but I'll defend his rights with a vengeance!
July 22, 2009 at 6:36 AM