what it takes to scramble eggs

We had scrambled eggs for breakfast Friday morning.

That in itself is not usual. Not really. Except that cooking eggs in this house is the tour de force of all feats. It must be proceeded by two cups of coffee, two extra strength Tylenol, and adequate patience preparation for the inevitable “What are you putting in my eggs, Mom? Is that cheese? I don’t think I like cheese. Oh, wait I DO like cheese! What is that? IS THAT CILANTRO?!? I. DON’T. LIKE. CILANTRO!!”

It’s just easier to throw some cereal in a bowl and add milk, see?

Scrambling eggs is up there with mowing the yard. It’s just an achievement I don’t undertake unless I have to. But since the yard hadn’t been mowed in almost two weeks, and Caleb was coming back from Iowa that night for about twelve hours before leaving for drill, and my brother Jon was here and could watch the kids, and since the neighbors had put up a flashing neon sign on the side of their house that said ARE YOU GROWING A JUNGLE?? I decided it was time to get out and mow.

So there I was, on Thursday morning, puttering along with a freshly unearthed appreciation for my husband and totally rethinking my refusal of Jon’s offer to do it for me. I’d finished the back and started up the side yard when I felt something fly up my shorts and sting me on the leg.

I yelped and brushed it off and kept right on mowing, thinking well, there’s the mishap for the day. It’s all smooth sailing from here. I made it three more steps before I was stung again. Then I felt a tiny dive bomber go zooming past my head, and then another and, EARTH TO JACKIE, I knew I was in big trouble. And yeah, as you may have already guessed, I’d upset an underground yellowjacket nest and they were, ahem, mad.

So, what went down after that wasn’t a pretty sight and definitely would have rivaled anything I’ve seen on America’s Funniest Home Videos lately. Somehow I made it across the yard doing an awkward version of the chicken dance on steroids. I got in the house and was all PHEW! thank goodness I survived! OH NO! I BROUGHT ONE ELEVEN IN THE HOUSE WITH ME!

Thankfully my brother, Jon, was there and after we shut the rather traumatized boys in their bedroom we scurried around the house with a can of raid and the biggest flip flops we could find, warding off the dive bombers and trying not to incur any more stings (for me).

And that’s how I ended up sitting on a package of frozen peas with other various veggie parcels on other assorted limbs, watching the remaining, oh I don’t know… MILLION, yellowjackets swarm around the abandoned lawnmower and thinking I’d be buying a new one before I’d be persuaded to rescue that one.

And because I was clearly not thinking rationally and probably slightly toxic from all the venom coursing through my veins, I decided to take two Tylenol PMs, that’s right TWO, to help me sleep that night. Ergo I completely missed my husband saying goodbye to me the next morning at five o’clock on his way to the range for three days and was equally delusional when Jackson crawled into bed with me several hours later and laid there breathing in my face.

When I opened my eyes and stared down at his nose, two inches away, I sat straight up and said “Jackson! Where is the egg? What did you do with the EGG?!”

(I hope the two Tylenol PMs can explain this, ‘cause I sure can’t)

Hence, after two cups of coffee and two Tylenol (the regular kind), I scrambled eggs for breakfast. 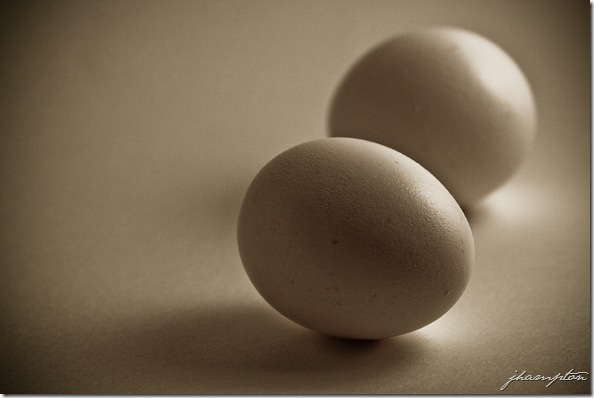