The best thing about working for a non-profit organization is the fundraisers. You know, “fundraising” for the Humane Society is just a really nice way of saying let’s see how much money we can guilt the citizens into donating to the homeless dogs today.

You plan for weeks and months even, and rent tents and print signs and recruit volunteers. Then the big day finally comes, you get out there bright and early to set up shop, you watch people trickle by and enjoy the booths, and donate a few dollars here and there. Then at the end of the day you gather up all the money boxes, and you sit around and count the money and pat each other on the back and “Look how much we made this year!”

I have zero to do with Fundraising at the Humane Society these days, except to code the bills and say “You spent how much on the “Cutest Dog” crown?! You know we could have fed three dogs for a week with that?”

As a member of the financial team, though, it usually falls on me to make the final money count of all the fundraising proceeds and then deposit it into the Humane Societies’ bank account. And every year we talk about getting one of those bill counting machines, and every year we say meh, we’ll do it next year and we never do. So, as you can imagine, there is no earthly way I would have willingly taken the boys with me to the meeting on Wednesday had it registered in my brain that the Humane Society had just hosted the largest annual fundraiser the previous Saturday.

But yeah, I must have been too busy thinking about the cup of coffee I forgot to drink that morning or, I don’t know, just trying to clear the cobwebs long enough to stay on the highway. I arrived at the shelter with Jack and Jon in tow and was all oh. that’s the Humane Society treasurer’s car. I wonder what she’s doing here. and what could she be lugging in that enormous red bag.

You know those movies where the bad guy walks into the office and he goes “here’s your money” and flings open his suitcase and bundles of 100 dollar bills spill across the floor? Well, yeah, imagine something like that, except in stacks of 1s.

Suffice in to say, we were at the Humane Society for an entire hour and forty-five minutes counting those stacks of bills a total of four times because we couldn’t make it add up the same way twice because we’re just thorough like that, you know. That was exactly an hour and forty-five minutes longer than Jackson wanted to be there, but he was remarkably well behaved. I mean, I only caught him building an Eiffel tower with the dollar stacks once!

So that’s how we ended up in the toy department at Wal-Mart where I told him he could pick ONE small toy as a reward for his exceptionally good behavior. I tried my best to push a matchbox fire engine, but he caught sight of the Bakugan toys and oh boy, there was no hope for the car after that.

In case you are like me and have no idea what Bakugan is, this is how Jackson explained it to me: “First it is a wittle ball. Den you ‘fow it on the floor and it opens to a wittle wo-bot. And it ‘as a mouth! And ‘wegs! It’s awesome!”

Let me just clarify that yes, I’m aware there is a recommended for ages +5 and up cartoon associated with these toys and no, Jackson has never watched it, and probably doesn’t even know it exists. I’m pretty sure he gets all his Bakugan info from a kid who brought his collection to church one Sunday.

Anyway, that’s how we ended up in the drive through at the bank, Jackson happily playing with his Bakugan in the backseat and me trying desperately to shove the stuffed manila envelope into the money receptacle because it’s lunch time and there is NO WAY I’m going to drag my cranky hungry kids out of the car and “please, ma’am, come around to the front entrance if your deposit doesn’t fit in the slot!”

So after opening my door, you know, to get better leverage to cram with, the money finally makes it to the teller and then we sit there and wait for twenty-five minutes. That totally deserves it’s own sentence, by the way. TWENTY-FIVE MINUTES! At which point I’ve listened to four stunning renditions of “The Itsy Bitsy Bakugan Went Up the Water Spout” and gotten to know the lady in the car behind me a little too well, and she’s seen my eyebrows in the rearview mirror enough to pick me out in a line up. I’ve also become a pro lip reader and I’m able to catch enough of the conversation behind the glass to know the original teller has now called for backup… twice! And I keep seeing this sentence flying back and forth: “I can’t figure out why it’s _______ dollars off!”

I want to say “okay, while ya’ll are figuring that out I’m just gonna go grab a bite to eat, and you know, maybe have a pedicure, and probably still make it back here in plenty of time.” But what I actually mutter is something like “Oh no, here we go again” as I see them start to count the several thousand mostly 1 and 5 dollar bills FOR THE THIRD TIME!

“What the matter, Mommy? My Bakugan’s hungry!” Jackson informs me.

“I can’t make it go any faster, Buddy” I tell him. “I’m not really sure what’s going on in there.”

Jackson thinks about that for a minute and then taps on the glass of his window and when the closest teller looks his way he yells “Hey! Can we get a status weport here?!” 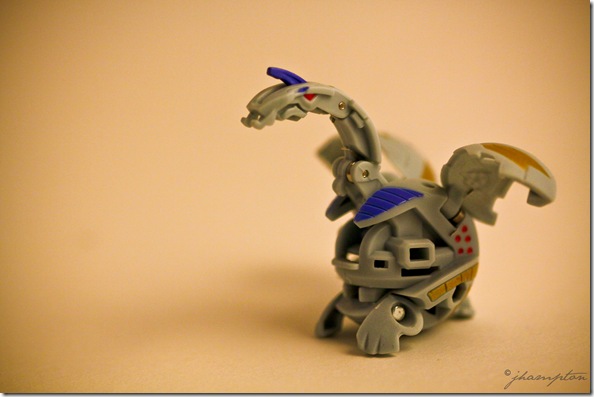 Karolena said…
haha, I am a little familiar with Bakugan just because I picked up about five of them from kids. I think Jackson's description of them is spot on; can't really say much else.
September 5, 2009 at 10:39 PM