of Moose Tracks and mattress

Moose Tracks has accompanied us through almost all the major milestones in our lives. It’s been at all the birthdays, the promotion celebrations, the I-ran-into-the-wall-and-won war wound barbeque, and the potty trained… FINALLY party.

Also, I guess I developed this completely unhealthy habit of craving Moose Tracks while I was pregnant and it has followed me into my baby is 18 months and I still haven’t lost the weight and beyond. Whenever I have overwhelming emotions of sad, scared, happy, silly, or stress, my first thought is dude, where’s the Moose Tracks?

I’m headed somewhere with this, I promise.

Somewhat related: I learned something today about the different ways Caleb and I react to stressful situations. Or maybe I learned something about the difference in what each of us would qualify as a stressful situation. I admit I’m the one who tends to think things are much worse than they are, while Caleb is very cool and level-headed in almost every venue. Thank goodness I have him around.

Case in point: Every time we’ve been in to check on the boys the past few weeks we’ve found Jackson sleeping caddy-corner in his toddler bed with at least one appendage hanging over the side, which we took as a sign it was time to move him into a twin size bed. And when I raised concerns about getting a twin mattress back to the house Caleb was like Dude, that’s why there’s a rack on top of the SUV, doncha know? So off we went today to purchase a mattress set.

After wasting an hour and a half discussing and debating (because buying a mattress that you hope your child will sleep on for 15 years is a really big deal if you think about it for too long) we were out at the car strapping the bed to the top.

We winched that thing down so tight I was afraid there were going to be permanent strap marks in the top of the mattress, but it was still sliding around a bit much for my comfort. I guess that’s what we get for buying poufy and plush instead of extra firm.

So I kept saying Man, this thing will go flying off as soon as we get on the highway and Caleb was going And if it does we’ll get out and pick it up.

I was finally persuaded to get in the car and home we went.

But getting on the highway was something else, let me tell you, because between the gravitational pull we created with the behemoth attached to our ceiling and the wind tunnel type noise inside the car from the flapping plastic wrap, my anxiety level was through the roof… or strapped on top of it, rather.

I got a major crick in my neck from leaning down, watching the butt of the mattress in the side view mirror and every time we’d hit a bump in the road I’d gasp and exclaim IT MOVED! IT JUMPED! and Caleb would go Yeah, so did the entire car and please chill out before you get an ulcer.

And ya’ll, I’ll never drive close behind a car carrying a mattress on top EVER AGAIN. I kept having visions of the car behind us getting totaled by a load of flying mattress set.

And then. THEN. It started raining. Not just raining. POURING. DUMPING huge buckets of water from the sky. And I was going Dude, maybe we should take a back road, or tighten down the straps some more, or I don’t know, maybe stick our arms out the windows and each grab a handful of mattress, and do you have an umbrella in case we have to ply it off the highway in the rain?! And Caleb was all Do you have your backseat driver’s license?

Yeah, he was calm and cool and level-headed and even suggested we stop and pick up some lunch to which I replied Uh huh, now that it’s nice and soggy let’s scrape it off the top going under the drive-through awning.

Of course we made it home, all in one piece, with one intact and completely dry mattress, just like he said we would. And after we’d set it up in Jackson and Jonathan’s room and stood back to examine our work, Caleb said “What do you think, Hun?” and I said, “I think I need Moose Tracks.” 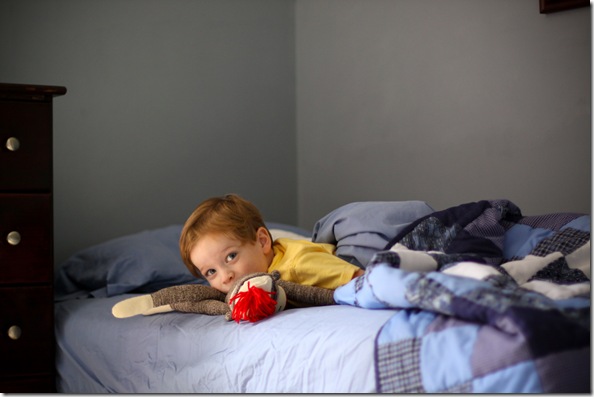