I’ve always been a lover of the Calvin and Hobbes comic series and not just because Jackson and Calvin are like twins separated at birth, a realization that dawned on me one day when I heard Jack carrying on a conversation with his Binky.

Switching gears for a sec: I don’t buy into the whole buy this box dinner, throw the packets together in a pan, and TADA! Gourmet meal from a carton, so those sorts of dinners are somewhat of a rarity around here. Not because I’m above reconstituting my dinner with water and a skillet, but because Jonathan and Jackson are like the Emeril Lagasses of the toddler world. And while they would happily eat Mac N Cheese until the end of time, they can smell the difference between a slaved in the kitchen all day stroganoff and a Hamburger Helper from a mile off.

Still, I have been known to resort to dinner from a box on several occasions. I mean, how else would I know they despise Hamburger Helper? Usually it happens when Caleb is away and it just seems ridiculous to me to cook a whole casserole for one and two half peoples.

Somewhat related: I read an article recently about military wives who fall out of practice cooking while husbands are deployed overseas because, let’s face it, kids do not appreciate home cooked food the same way husbands do, and with the husbands gone things quickly degrade to McDonalds or Taco Bell tonight, guys?

Then at the end of deployment many of these wives find themselves standing once again in a now unfamiliar territory – the kitchen. It’s a monumental task learning to cook again and where are my measuring spoons?! I know I saw them somewhere around here eight months ago!

Anyway, I know better than to go judging those ladies, because who knows what kind of an Easy Mac connoisseur I will be during deployment.

But it hasn’t reached that point yet. I usually cook for the boys when Caleb is gone, just like I would if he was here. Except on this particular day last week. When for some reason I still can’t fathom I saw that box on the shelf in the store and thought that doesn’t look half bad.

And maybe it wouldn’t have been if they didn’t make the instructions so incredibly complicated. Since when does it require a MBA to decode the back of the fettuccini box?? There were six different packets labeled seasoning, sauce, toppings, spices, etc, etc. After I put the sauce in instead of the seasoning EXCUSE ME! I didn’t know they were different I decided to just throw it all together in the pan and hope for the best. 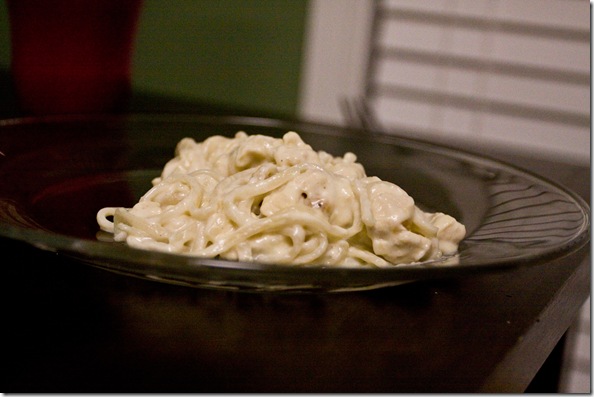 So getting back to the Calvin and Hobbes thing… see this is why I need cameras in my house, people. Because if we had cameras in the house I’d have footage of the look on Jackson’s face as he speared the mound of congealed glop on his plate and said “Mommy, what is this?”

Since we don’t have cameras in our house I don’t have a video to show you, or even a picture that captured that priceless moment.

But I can tell you that it looked something like this.

Marian Frizzell said…
Cracking up. Yep, sometimes that happens. I will admit that since Josh has been gone there have been more than few frozen pizza or cereal nights. But I'm trying to keep cooking. It's just hard cooking for one. Either you improvise (which I have done...and sometimes turns out well) or you have leftovers for the next three weeks (which gets boring). So yeah. Chinese takeout is my friend? :)
October 10, 2009 at 10:52 AM

Jackie said…
girl, I don't blame you. Weeks of leftovers doesn't sound appetizing. If it was just me I'd probably be eating Chinese takeout too... or Ramen every night, dry of course because I'm too lazy to boil water. But yeah, I can't even imagine what Jackson would say if I put raw Ramen on his plate.
October 10, 2009 at 11:11 AM