my brief stint as an electrician Last week I rewired the two hanging skeleton lamps in the living room. We all agreed the naked lamps had to go. They were awesome decoration and not functional at all. No one wanted to sit at the desk with those lamps on. The bulbs were overpowering. The heat was bad too.

So I bought some cheap pendants the last trip to Ikea and prepared to exchange the naked shades for some more suited for task lighting. On the same day I discovered the chickens have worms. I’m not going to describe how I know, but if you just gagged a little you probably have some idea. Also, one of the dogs dropped an enormous tick in my bathroom. Like, the size of a small grape and so bloated it’s little kicking legs couldn’t reach the floor to scramble away from our four pairs of morbidly horrified eyes. AND the (practically) brand new car has less than 15,000 miles and an undetermined issue with the breaks and possibly some leaking fluid. First world problems, all. And there’s nothing like nearly electrocuting yourself to put it all in prospective. So now that you know what happened, want to know how in the world one goes about rewiring a lamp the wrong way? Well for starters, you don’t unplug it from the electrical outlet. And then right between Jackson asking me which uninhabitable planet in our solar system I’d most want to attempt to survive on, Tucker barking at a butterfly outside the window and Jonathan yelling that Piper was eating a ball of hemp, I cut the wires. 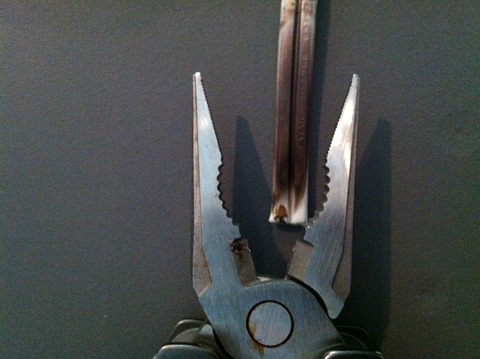 Accompanying the loud bang was a spark and small flame that raced up the cord before snuffing out. And then all was quiet. Possibly because I’d managed to flip the breaker for the wall outlets, so the computers turned off. Which always gets their attention. We sort of stared at each other in shock for a second and then Jonathan looks at me and very seriously says “da da dum, we’re dead.”