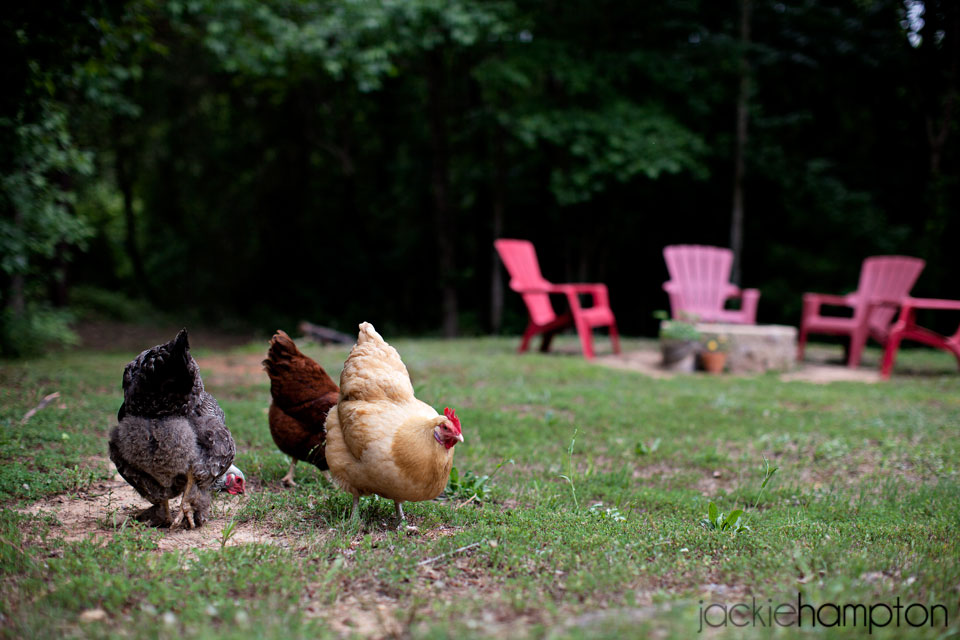 There’s a good bit of speculation among chicken owners about the capacity of a chicken’s memory. On the one hand, most hens (mine included) can distinguish their regular caregiver from other humans. I’ve witnessed this because my hens get excited when they see Caleb, but they raise the roof when they see me. I’m the bearer of the mealworms, you know. On the other hand, the best way to deal with a dominate hen who picks on the other ladies is to remove her from the coop for three days. When you reintroduce her to the other birds, it’s all “Hey, you’re new!” They don’t remember her and she’s forced to reestablish her place in the pecking order like a completely new hen. Therefore it could be reasoned that a chicken has a memory span of about three days.

So I don’t know for sure which is right. Are they incredibly intelligent and pretend to be dumb? Or are they dumb and occasionally appear intelligent? One thing I know for sure is that my hens lack a certain awareness of dangerous situations. They avoid other humans that come around, but would walk right up to the dogs if it weren’t for the growling and drooling going on. That is the only, and I mean the ONLY good thing about our former roosters. They were constantly herding the hens and keeping a lookout for trouble. And goodness knows we have the ideal conditions for predators. During the years we’ve lived here I’ve seen stray dogs, coyotes, foxes and this guy: 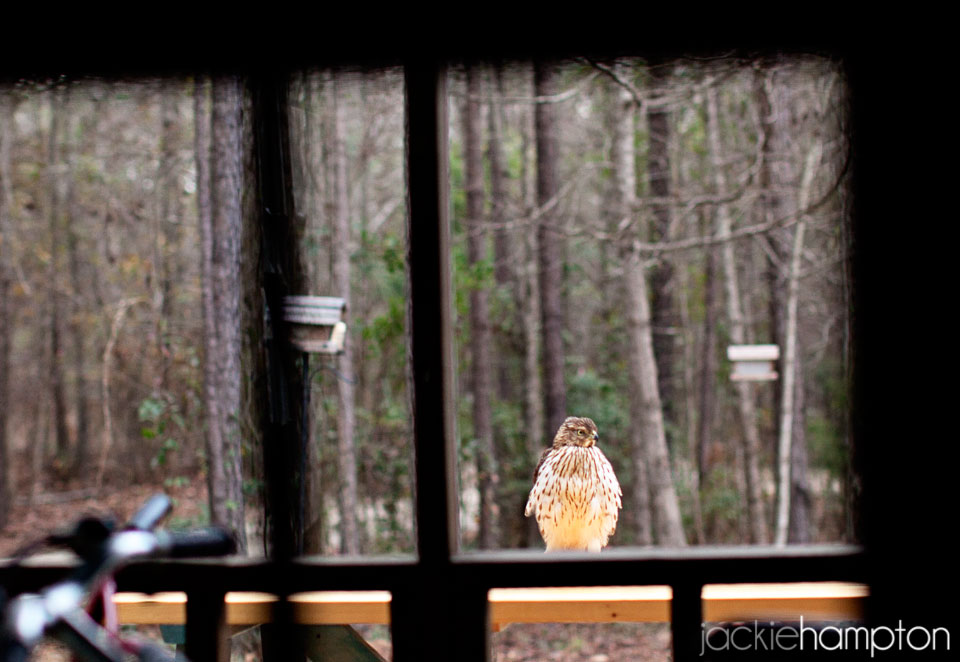 In short, not the best idea in the world to leave the chickens out of their coop unsupervised, but occasionally I do it.

a. They have mastered the jailhouse rap in which they run their beaks back and forth along the chicken wire until I am manipulated into setting them free.

b. Babysitting chickens while they graze the yard is not my favorite way to be unproductive.

So now you have a picture of what was going down on this particular morning several weeks ago when the cacophony of beaks on wire had persuaded me to release the hens. And after watching them for as long as I could stand to sit, I left them searching out crickets in the backyard while I went in to wash eggs. I had just turned around to fill an egg crate and put it in the refrigerator when I heard a horrible squawking. I glanced out the window just in time to see Ginger run by with an wild animal nipping at her heels.

I dropped everything, yanked open the front door and chased them down in my bare feet screaming bloody murder. I caught up to them in the side yard where Ginger had been pinned to the ground and wild animal that I couldn’t identify had a mouthful of her backside. I must have made an impressive sight as I charged at them because unidentified wild animal dropped Ginger, turned and ran off into the woods with a white mustache made of chicken down.

Obviously there are no pictures of this scenario so I’ve drawn one for you. 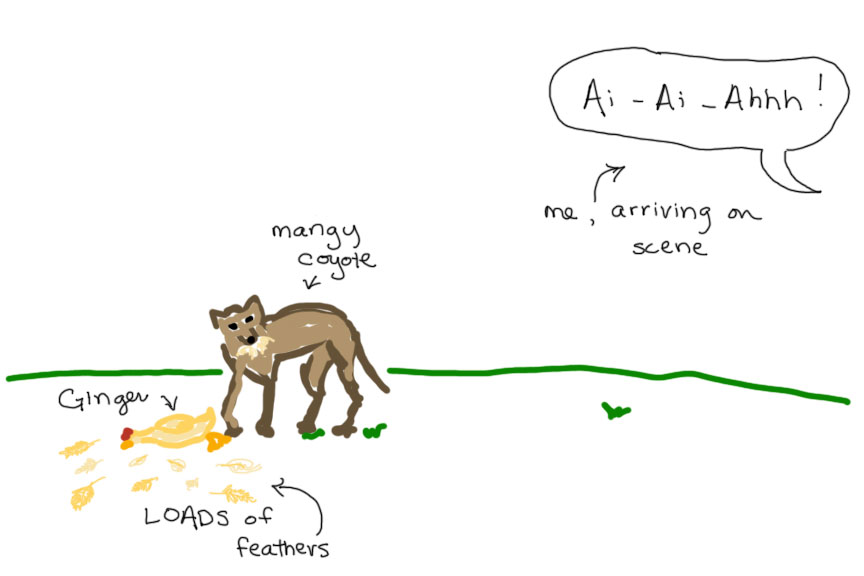 The wild animal I couldn’t identify turned out to be a coyote, very thoroughly covered in mange and therefore looking more like a chupacabra than a coyote. It was extremely desperate for food and chased Jelly out of the woods half a minute later even with me standing just there in the yard. I scared him off again and quickly shut a very distraught Jelly and Babs in the coop.

Based on the amount of feathers littering the ground, I thought Ginger was a goner for sure, but when I ventured back to the spot of her demise she’d disappeared. A quick search of the yard and I located her hiding behind a flower pot near the front of the house. She was scared silly and her eyes looked like they were about to bug out of her head, but I couldn’t find a scratch on her. Apparently all her layers and layers of butt feathers had protected her plump little rump.

I wish there was a moral to this story, but I put Ginger back in the coop. And because her memory is so short, three days later she was like a completely new chicken. And absolutely no wiser for her experience. 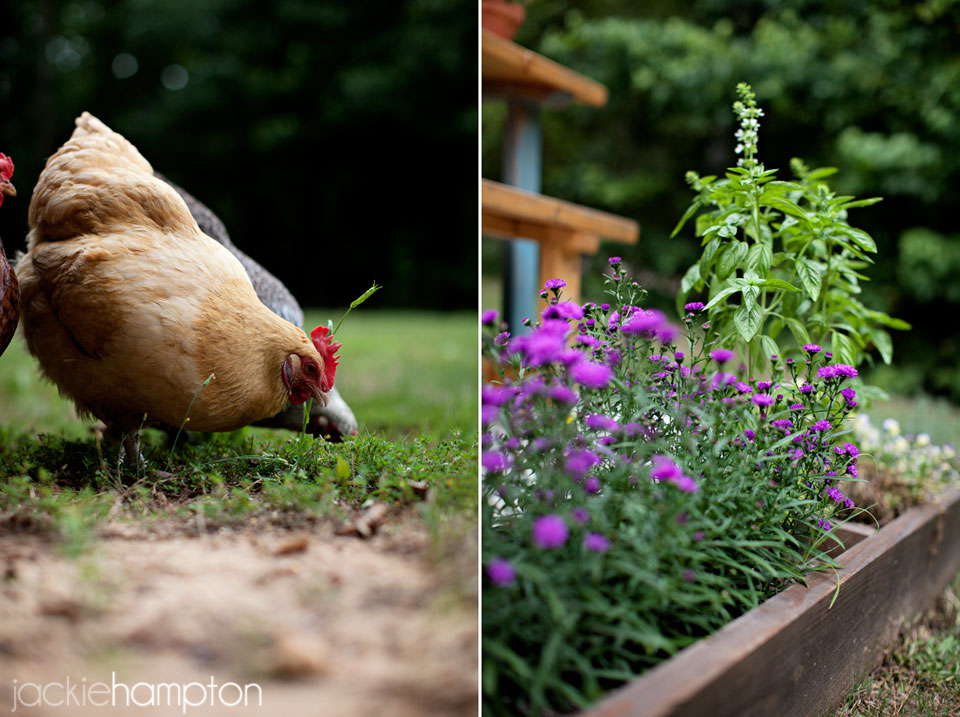 NANNY said…
Tell the boys I want their picture of mom screaming like a banshee after mangy predator!
June 3, 2014 at 11:00 AM