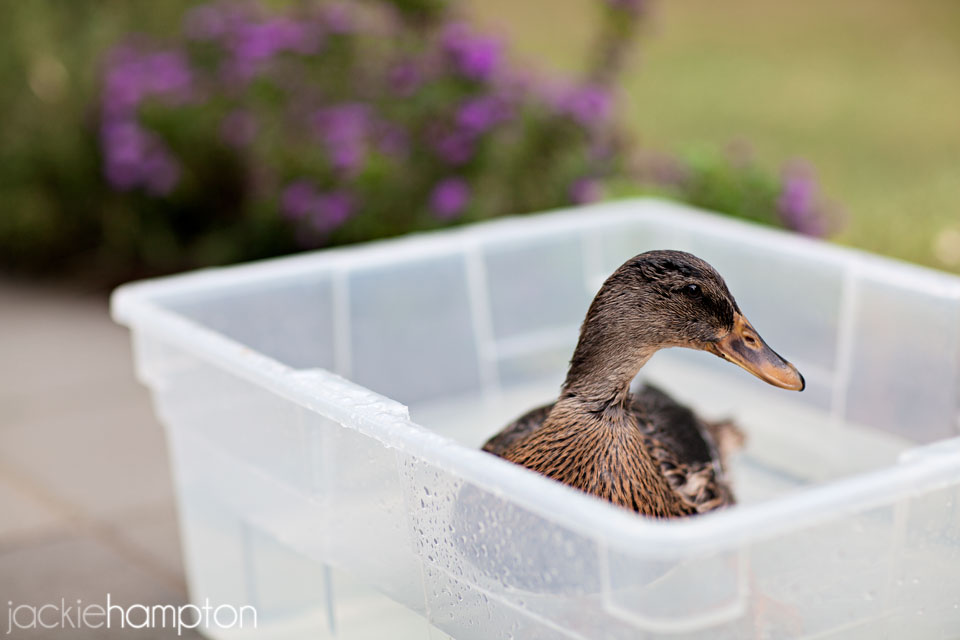 I’ve been putting off writing an update on Wobble because the last few weeks with her have been challenging. Between the blog and the pictures I posted on facebook, there were quite a few people who got involved in her little ducky life. And as she popped all of her adult feathers and started to show more independence, there was growing concern for her future and her chances as a lake duck. It was always our intention to release her into the wild when she was old enough, but it was apparent to us (and others) that she had become too attached to our family. 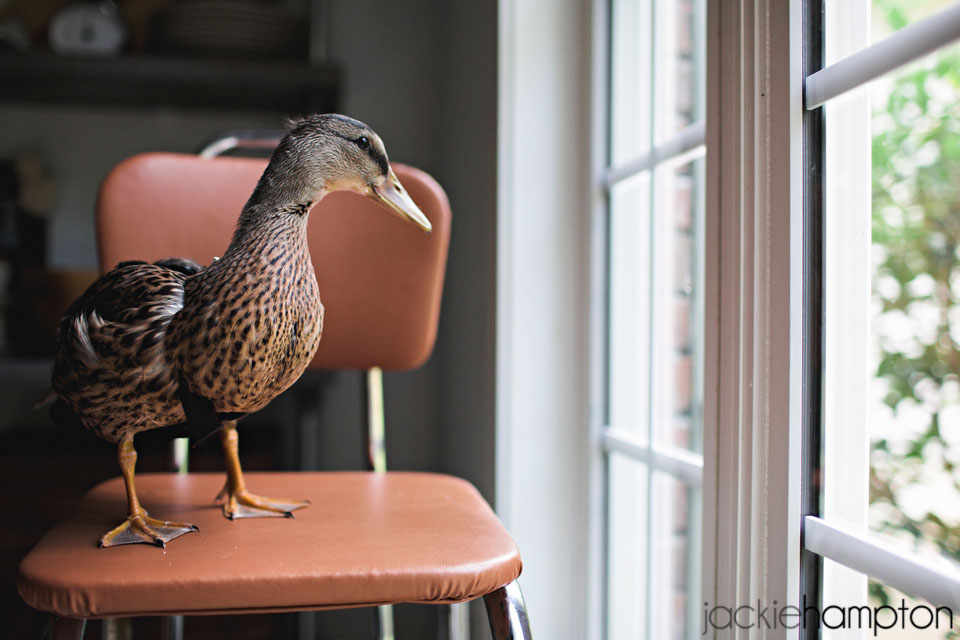 It was no longer a case of taking her to a pond and leaving her there. We knew there was no way she would swim away happily and never look back. 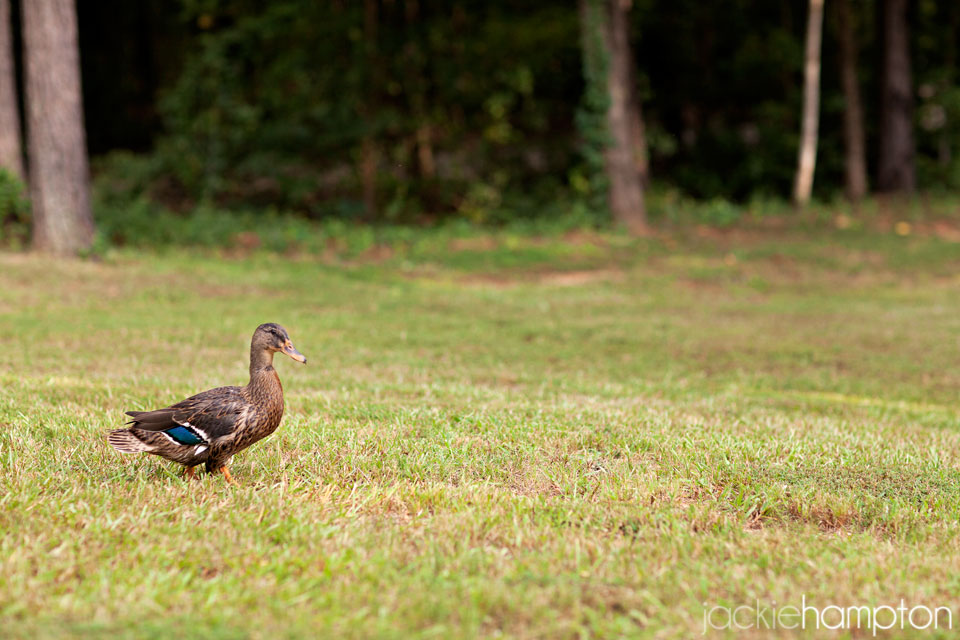 When she neared 10 weeks old and all of her flight feathers came in she surprised us all one day by launching off the grass and flying around the yard. Actually, I think she surprised herself as well because the landing that followed was more like a face plant. 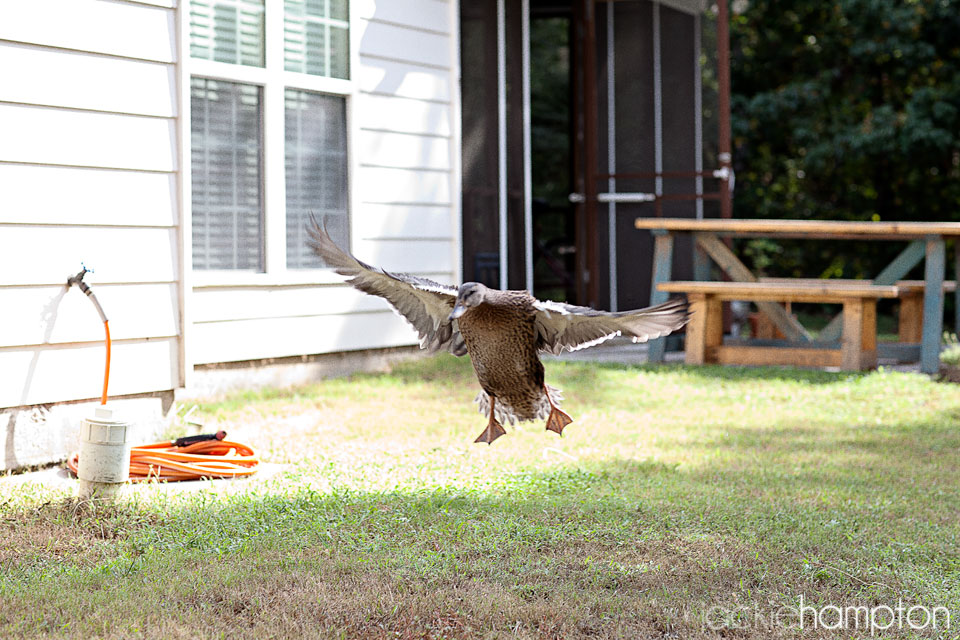 I had no idea she would be able to fly as I’d read that mallards learn to fly from other ducks and she’d never seen another duck up close. We were so excited that we took her outside every day after that and encouraged her to fly as much as possible. 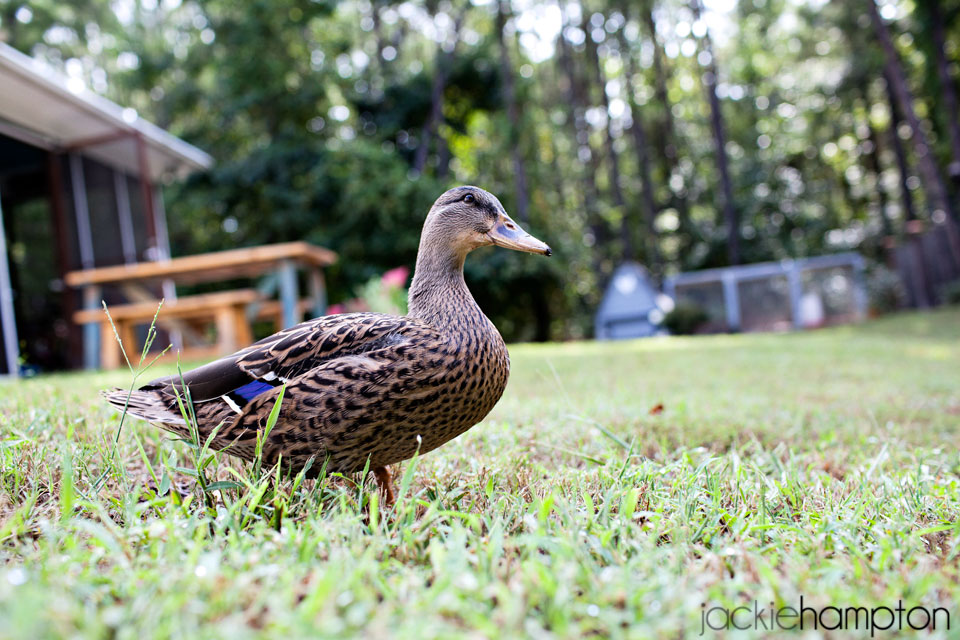 She got much better at landing and started flying higher and farther. But the flying thing bit us in the butt when she soon realized she could escape her pen on the back porch whenever she wanted to. Every morning we’d find her perched on the door mat tapping away at the glass. Rounding her up and putting her back in the pen was no small task. 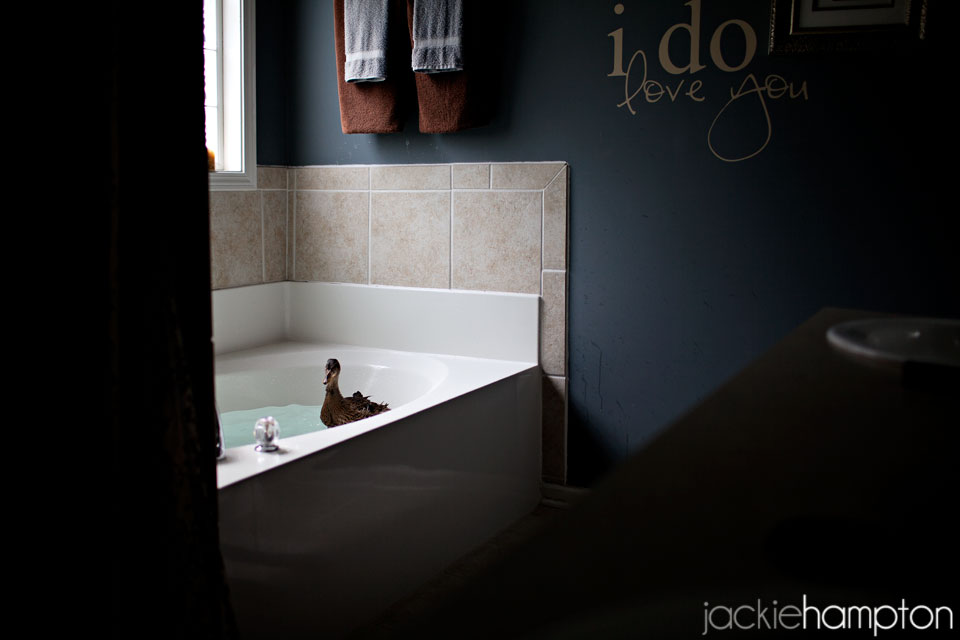 Despite the myriad of pictures we have that say otherwise, she was constantly toeing the line between wild and domestic. She had the inherited mallard instinct that made her very wary of us. Mostly she hated to be caught and would run anytime she thought you were about to touch her, but then she always wanted to be with us and seemed to love being held. 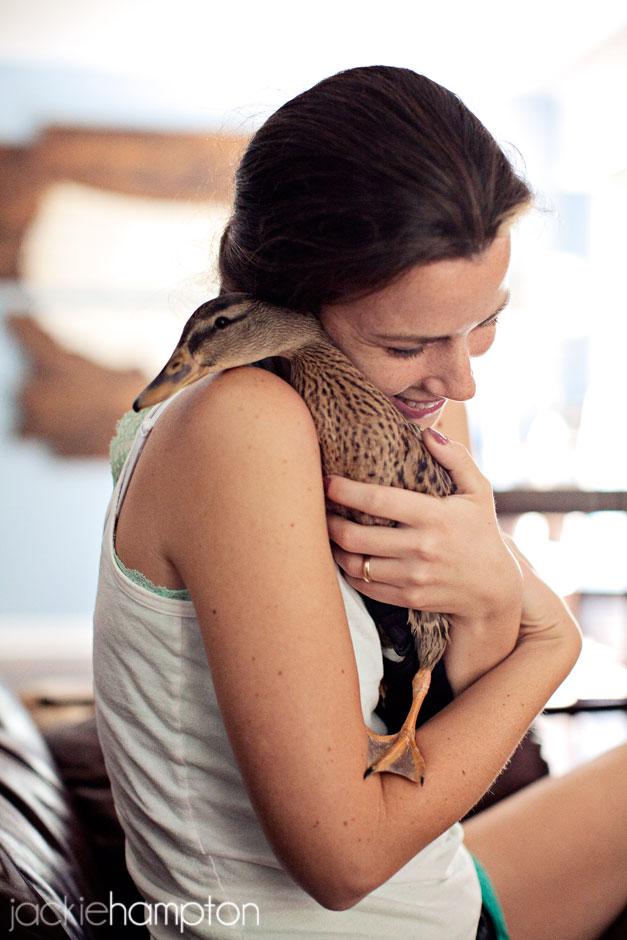 I think her life was pretty confusing, thanks to us. 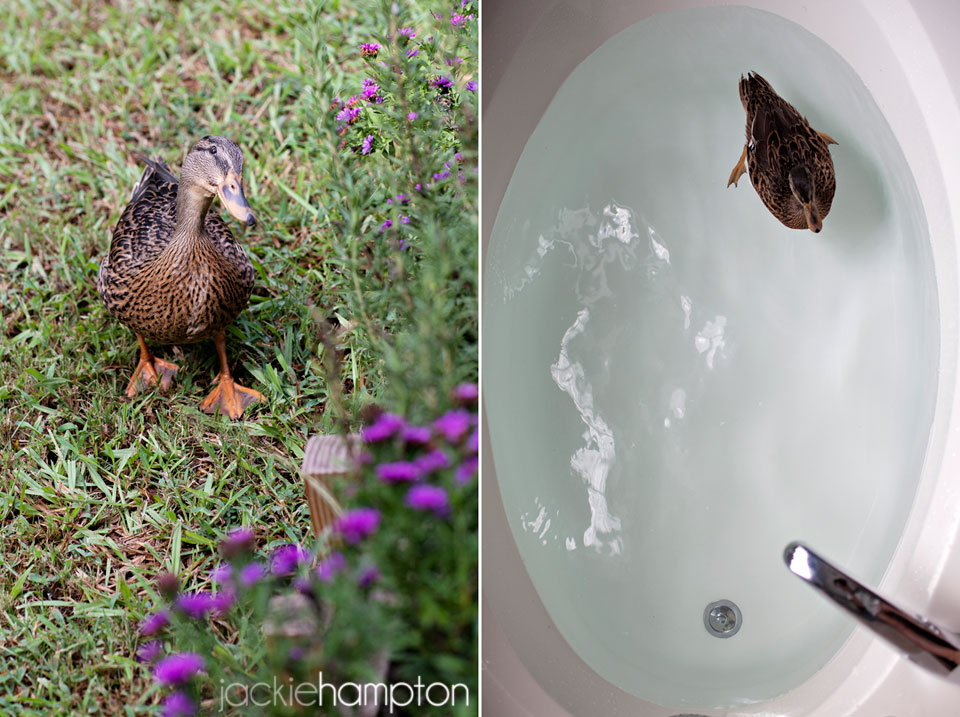 It eventually reached the point where we had to make a decision. Either build the fort knox of all duck houses and fully bend her to domestication, or try to give her a chance at a normal mallard life. The clincher for me was the way she behaved when she wasn’t around us much. 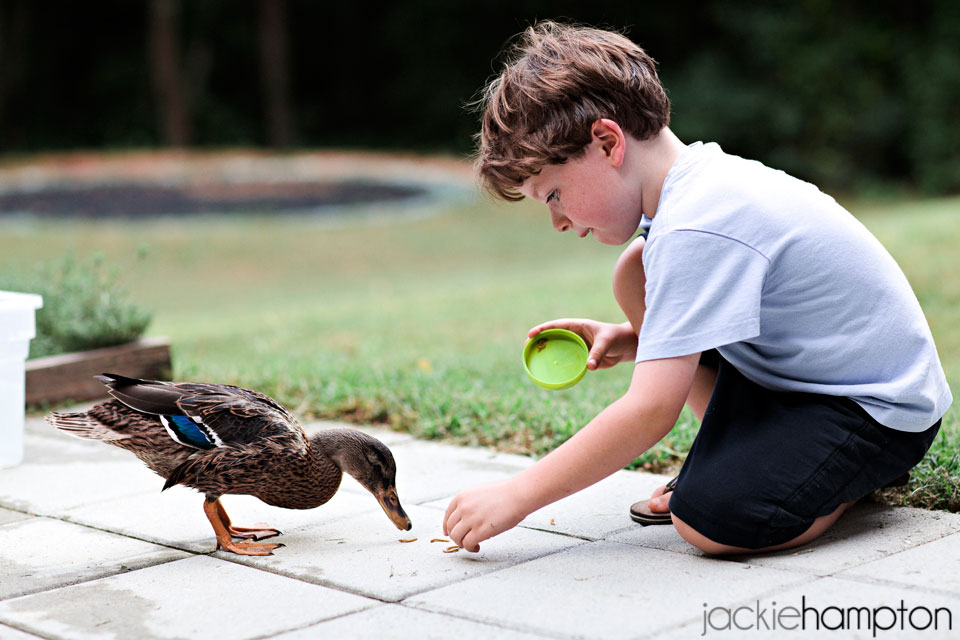 If given a couple of days without being handfed or spending time indoors, she’d swing way into wild mallard territory, acting scared of us and making catching her a two person job. I could see that keeping her as a pet would mean a constant effort to keep her tame. It just seemed like she wanted to be wild. 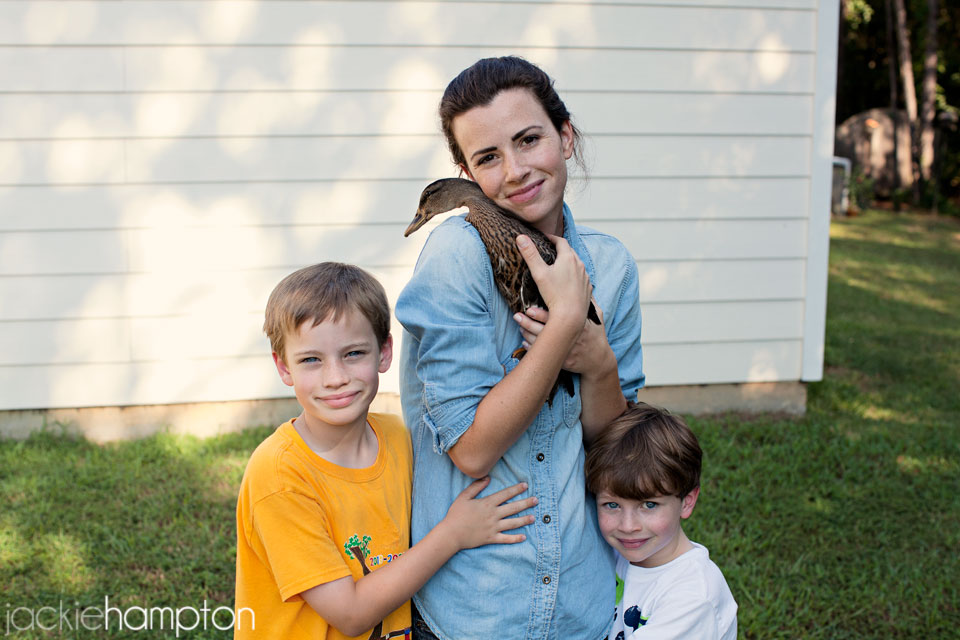 On Monday we took her to the home of one of Caleb’s former Army buddies. He and his family live on a small lake and have raised geese to release there. They have a small flock of water fowl that inhabit their backyard. They graciously agreed to take Wobble and help integrate her into the flock. 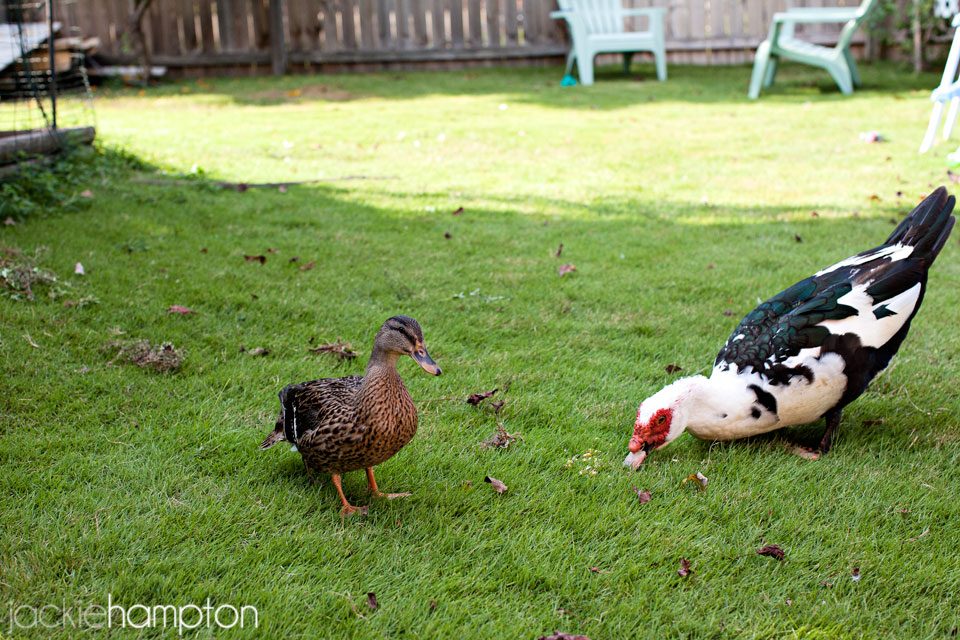 We felt this was the best situation we could give her. Here she will have her freedom but still be fed, protected and allowed interaction with people (if she wants). Also, other ducks! She did not seem too thrilled by the flock at first, but we are hopeful that with time she will realize she is not actually a human. 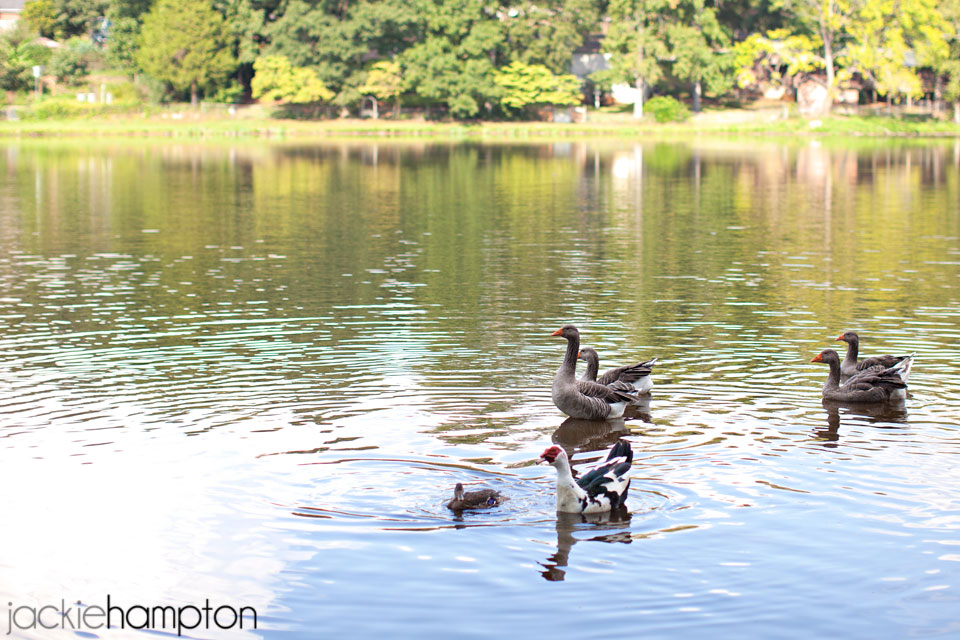 Not running away. I’ll take it as a good sign.