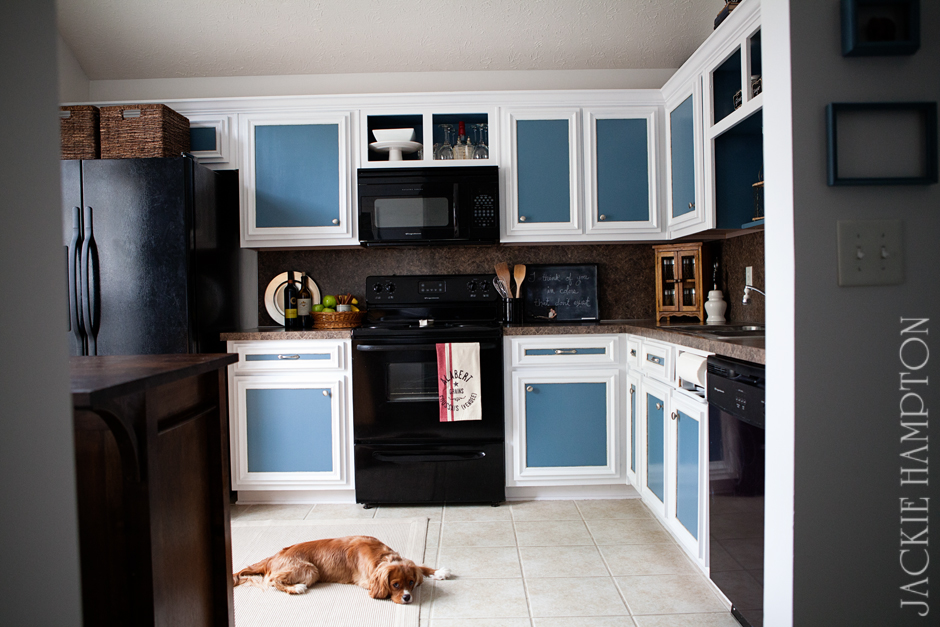 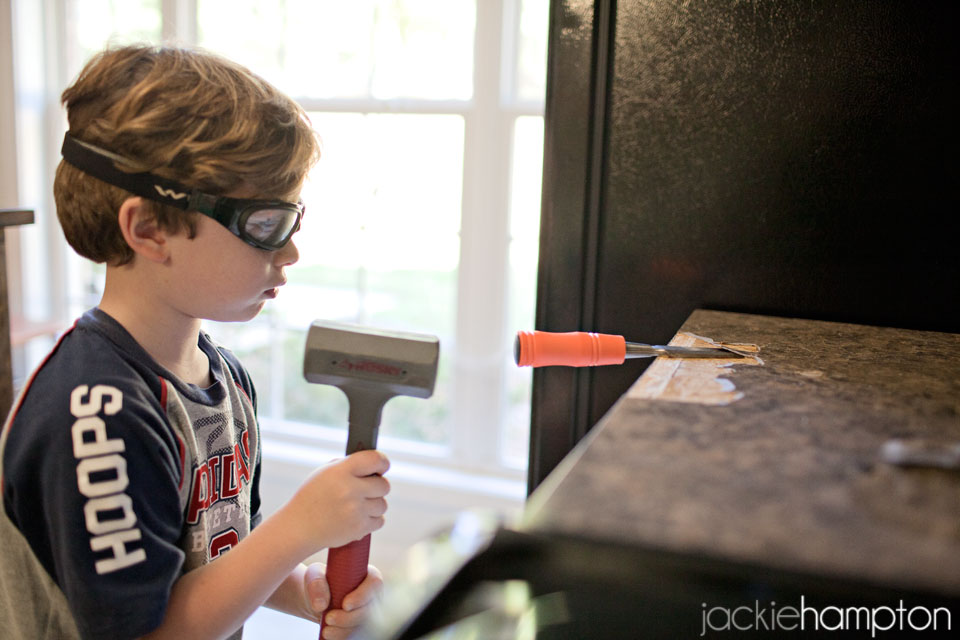 The only thing we really disliked about the kitchen was the brown and black matching laminate countertops and backsplash. They were dark and dingy. They hid dirt… and appliances. They were ultra durable, but not very fun to look at. We dubbed this area of the kitchen the “sea of laminate”. It was time for it to go. 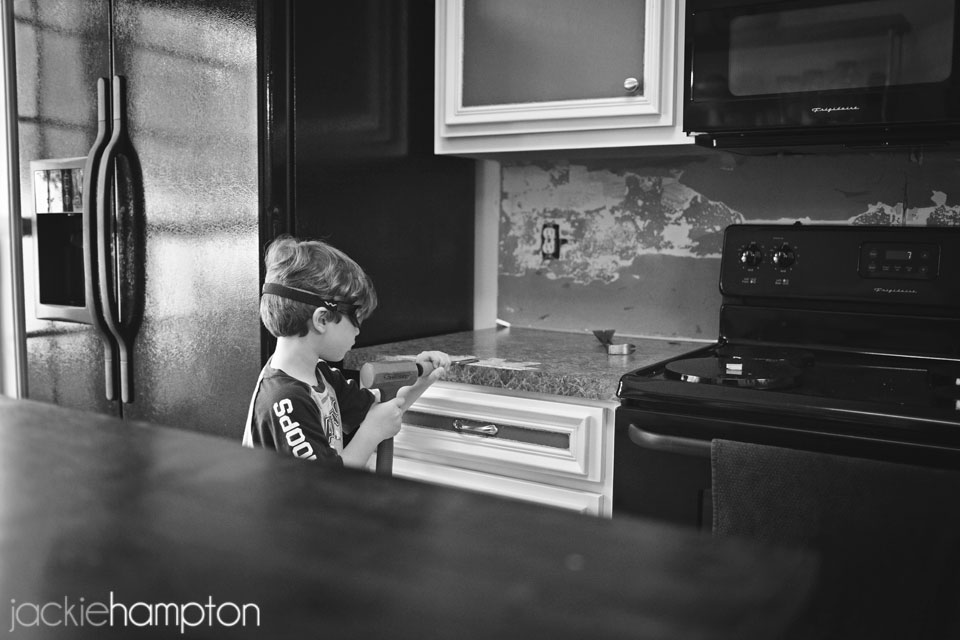 We started off by peeling up all the laminate from the backsplash and countertops. I encourage the boys to get involved in projects if it’s something they are interested in. Jonathan thinks demolition is God’s gift to mankind. If our projects involve tearing something up, he’s usually the first to volunteer. 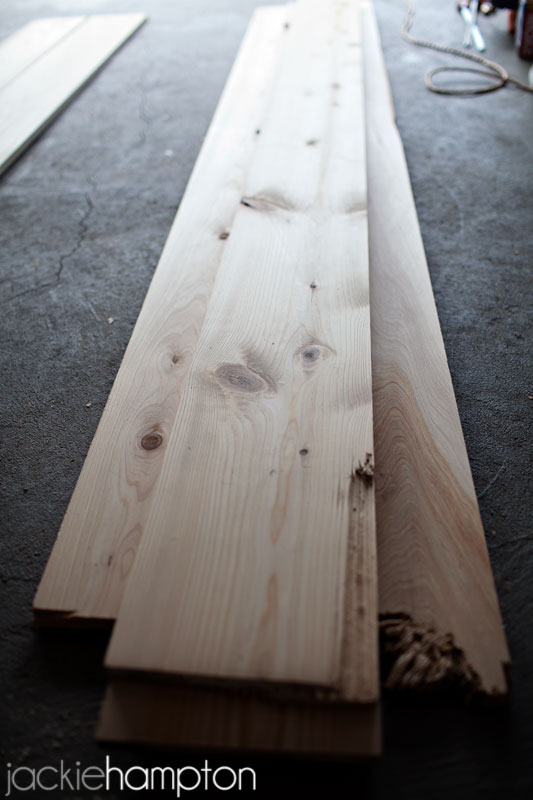 Our wood pile in the garage contained a handful of 12 foot long cypress boards that were given to us by some friends when they moved out of town. We’d used a little bit of the wood for small projects, but had been saving the majority of it to do something big. Turns out we had just enough boards to turn the cypress into a kitchen countertop. 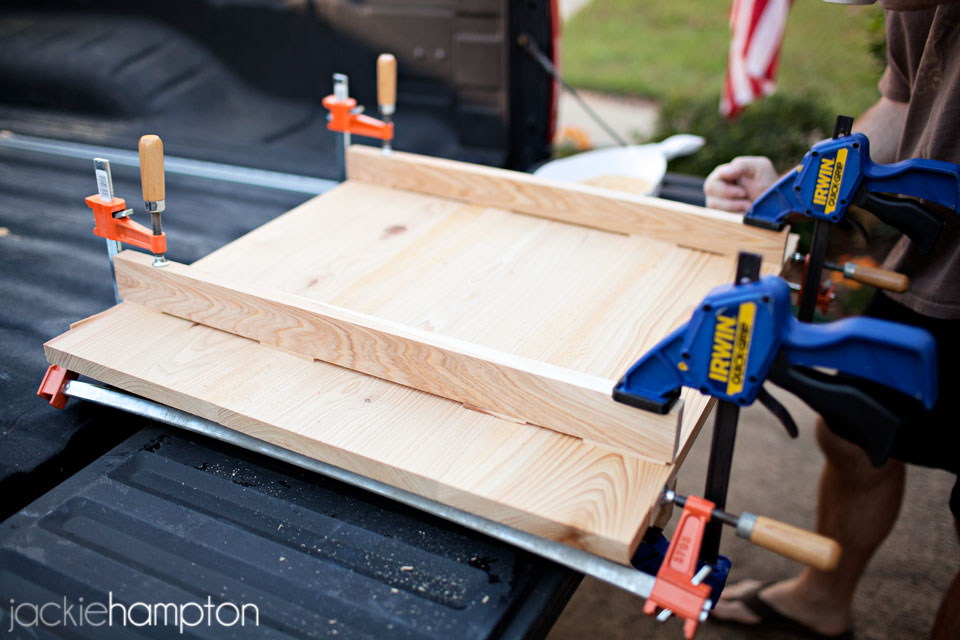 We found a local cabinet maker who cut and planed the boards for us so they would fit together seamlessly. Then Caleb used wood glue and a plethora of clamps to hold the pieces together overnight. 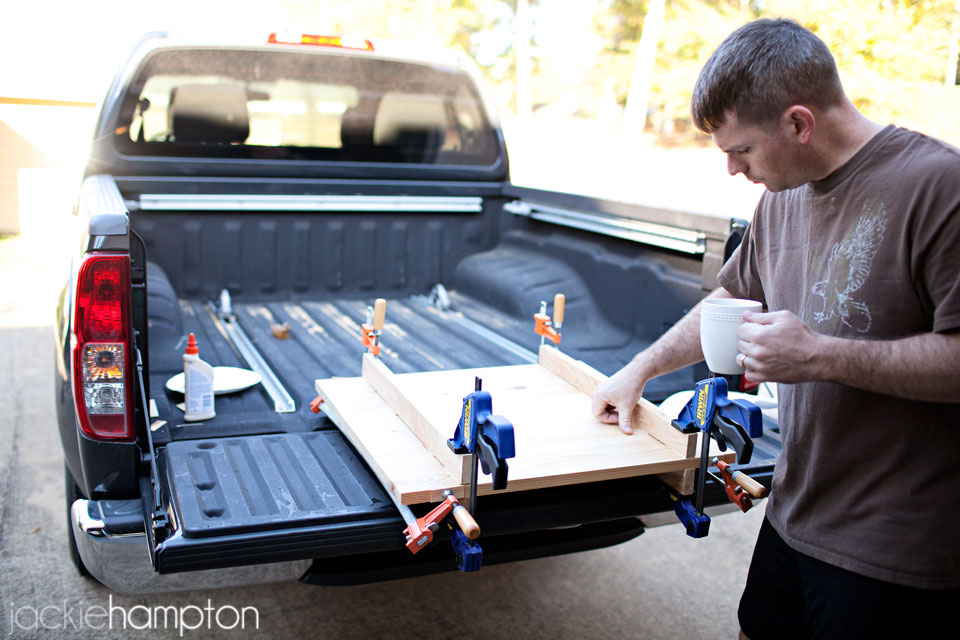 We filled all small cracks and knots with wood filler and sanded the countertops for hours with 80, 180 and 220 grit sandpaper. Sanding is my least favorite part of projects. It gets everywhere. Ew. 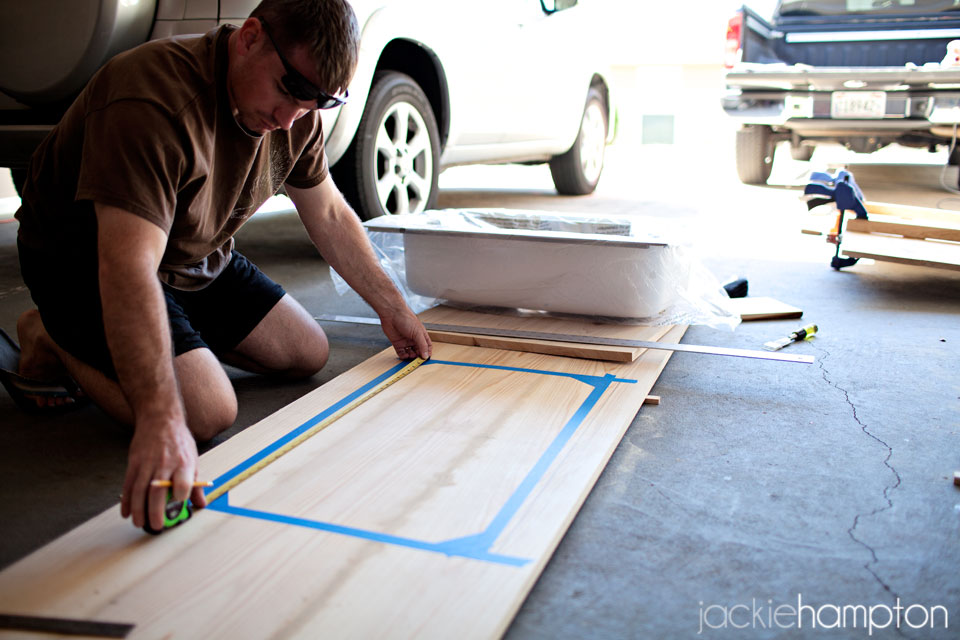 We didn’t originally plan to put a new sink in the kitchen, but it sort of made sense. The plumbing under our old sink was a disaster. The pipes were sloped wrong and one drain would bubble while the other sink was draining. I was determined to fix it and we decided to put in a deeper, single basin sink while we were at it. 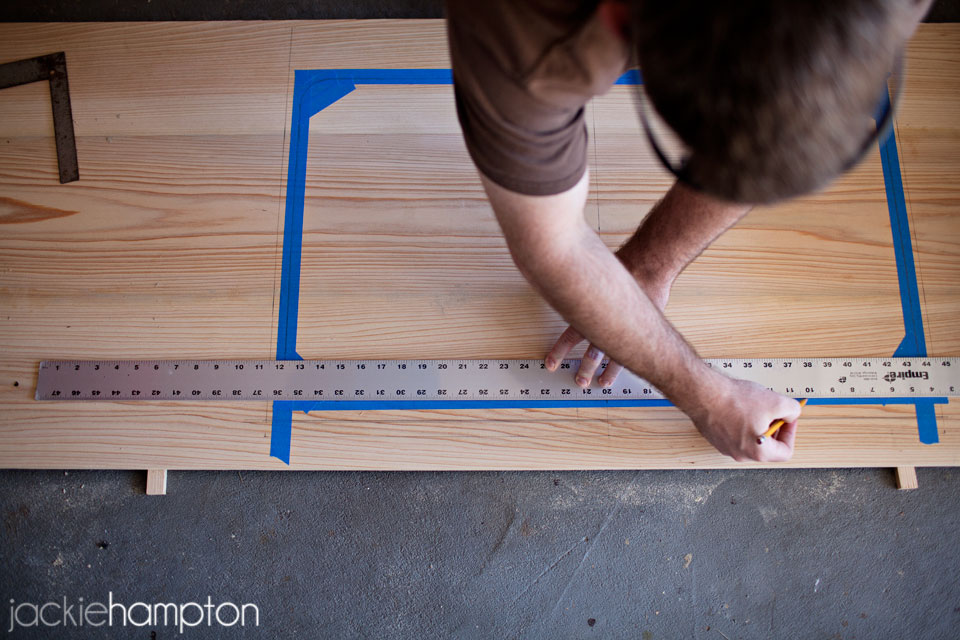 My philosophy for cutting holes in big important things (like countertops) is to measure ten times and only cut once. Or leave the measuring to Caleb while I look over his shoulder and second guess everything. I’m ultra helpful like that. 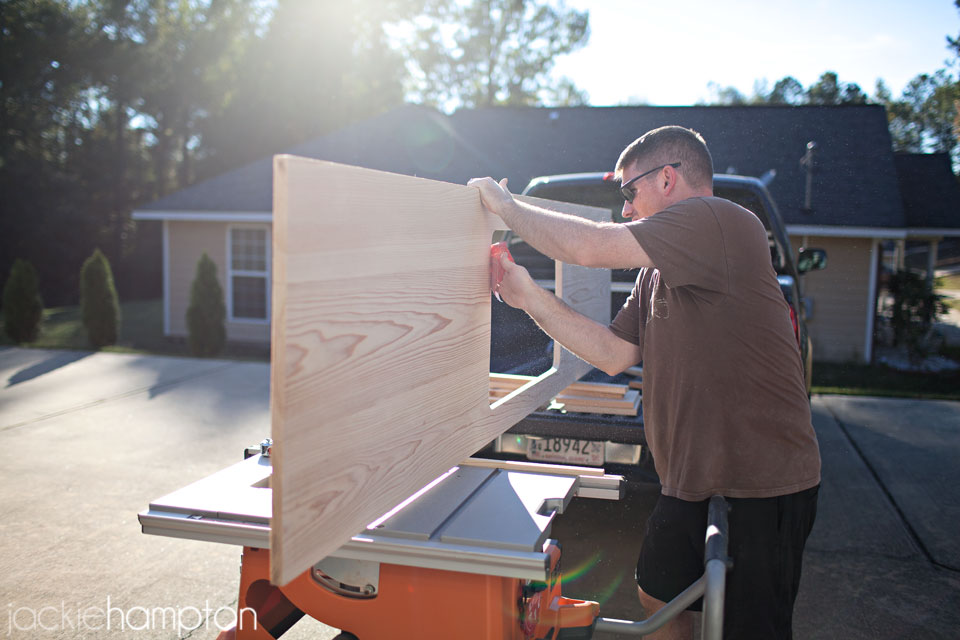 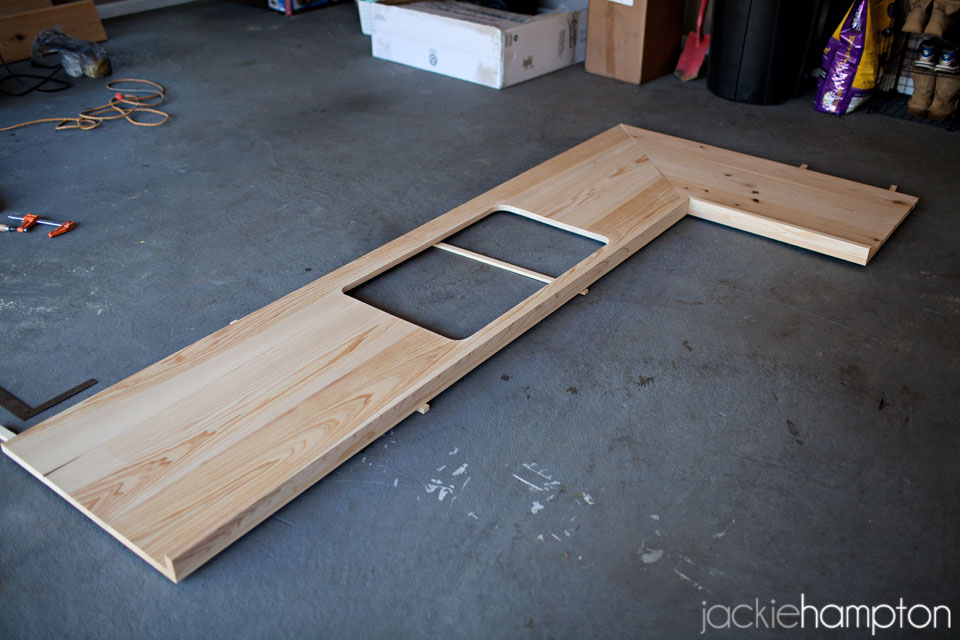 This is the larger section of countertops. We laid them upside down and dry fit them together to make sure the corners lined up nicely. Okay, I admit to being the doubtful one. 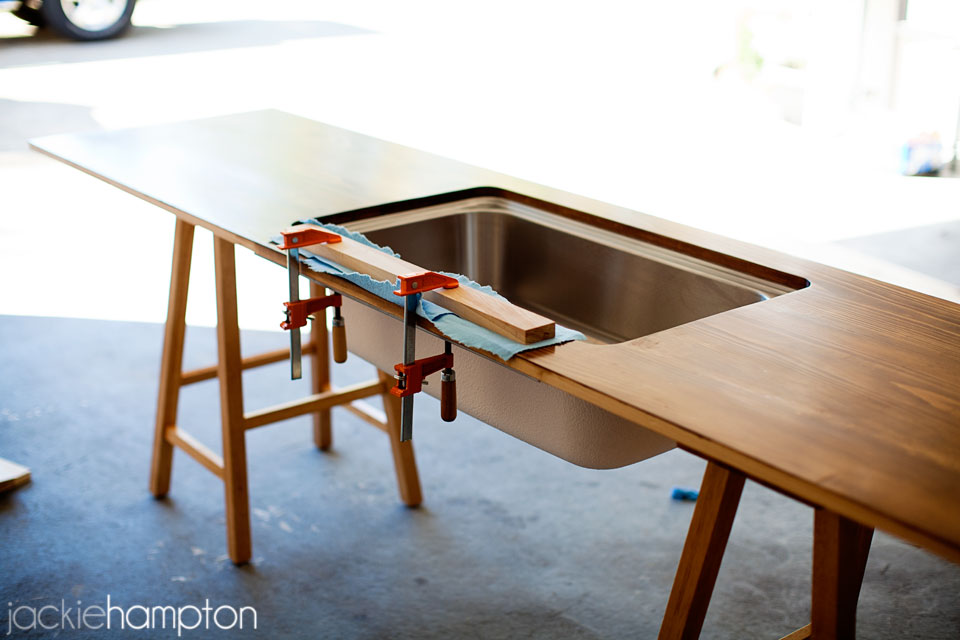 The next thing we did was take a week and finish the tops with five coats of stain/poly and five more coats of straight polyurethane. I am notorious for rushing on finishes so I really had to sit on my hands and let each coat dry completely. The result was a smooth surface that beads water nicely. 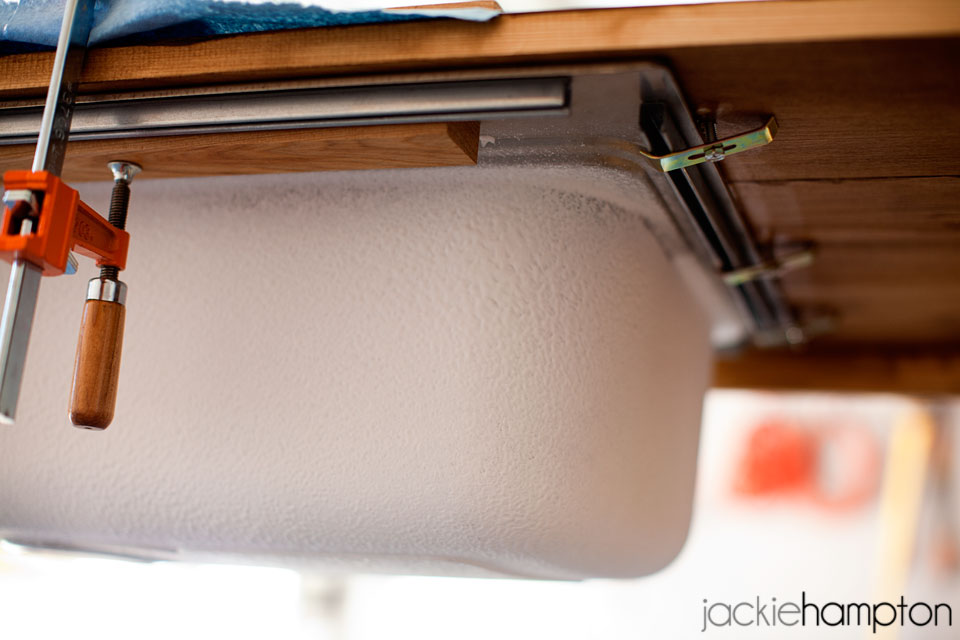 Once the finish had cured we attached the sink to the underside of the counter. 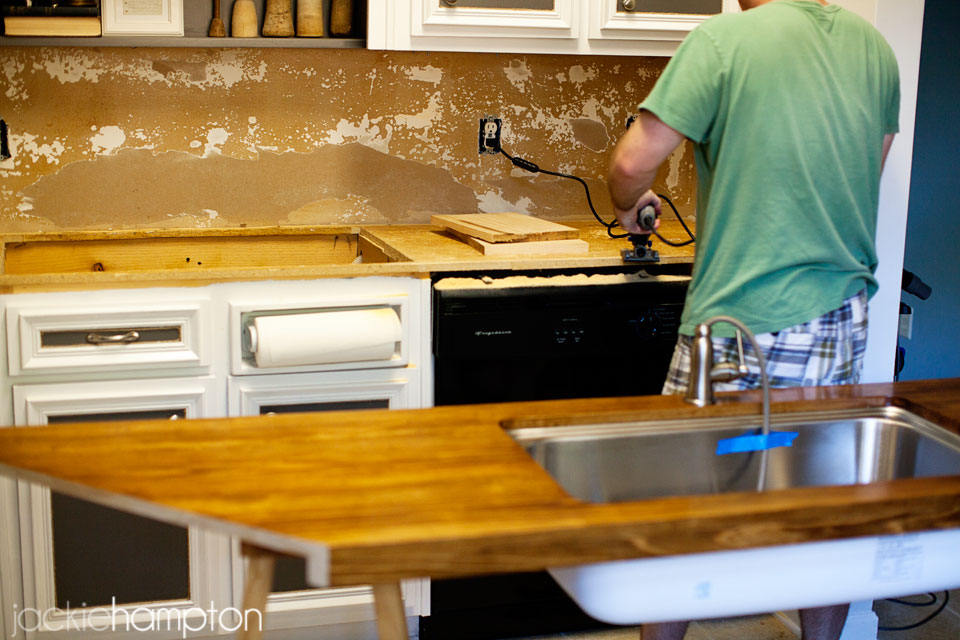 There were particle board counters under the laminate we ripped out and we decided to leave them in and install the new counters over top of them. This would provide extra stability and keep us from having to do extra demolition. Caleb had to trim a lot of the particle board to make things fit correctly. That collection of dust on top of the dish washer? Super fun. We orchestrated this trim by setting the new counter in place and marking any spots that didn’t fit correctly. Caleb calls this a “MacGyver Installation”. Most of our projects include something harry like this. It eventually meant we were without a kitchen sink for 24 hours or so. 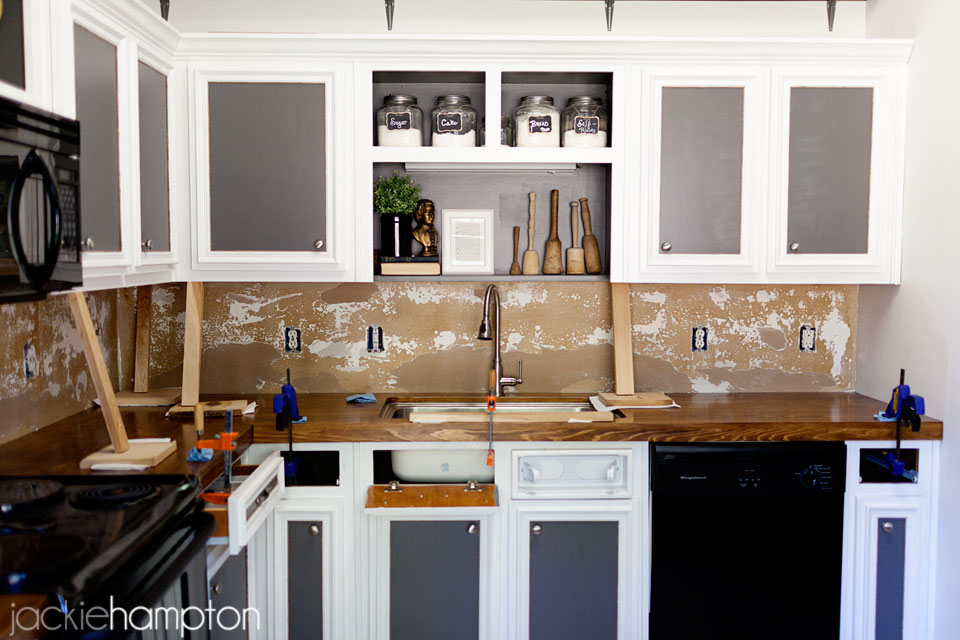 When everything fit correctly we applied wood glue between the particle board and the cypress and clamped everything down. 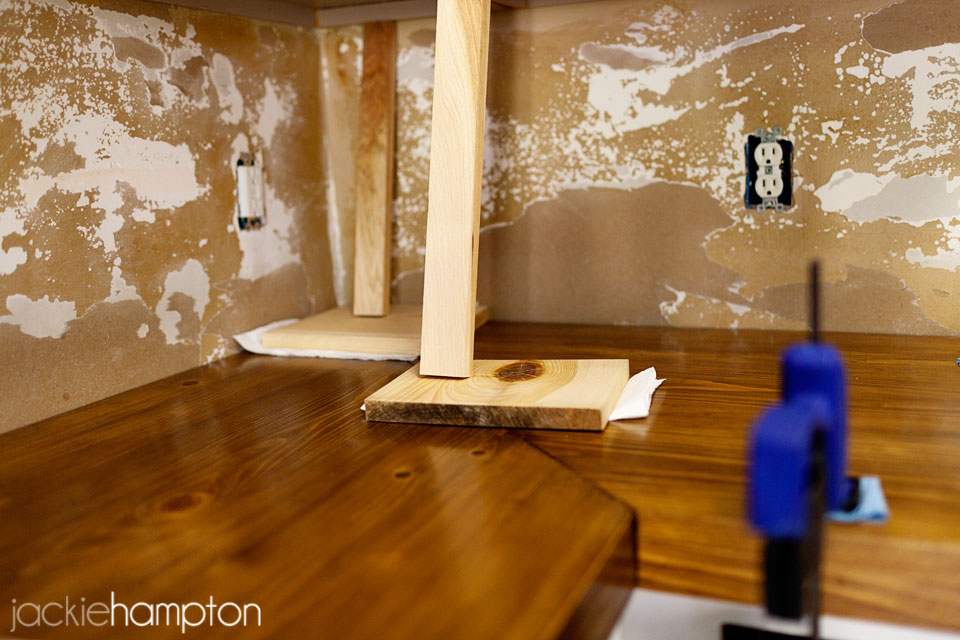 In the places that clamps wouldn’t work Caleb fashioned some makeshift wedges to keep the counter flat until the glue cured. 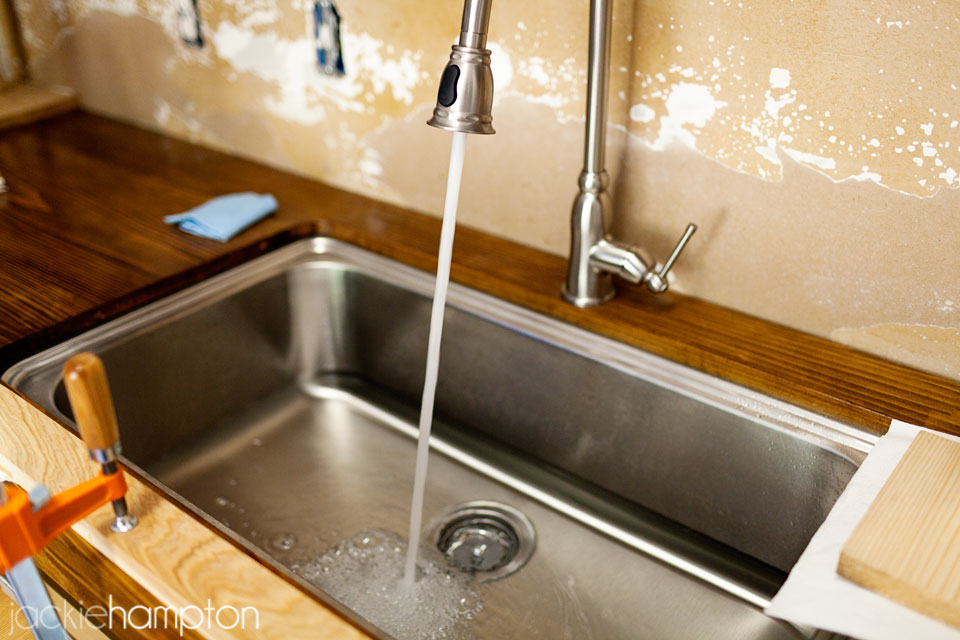 While waiting for the counters to set we tackled the plumbing and reconnected the water. 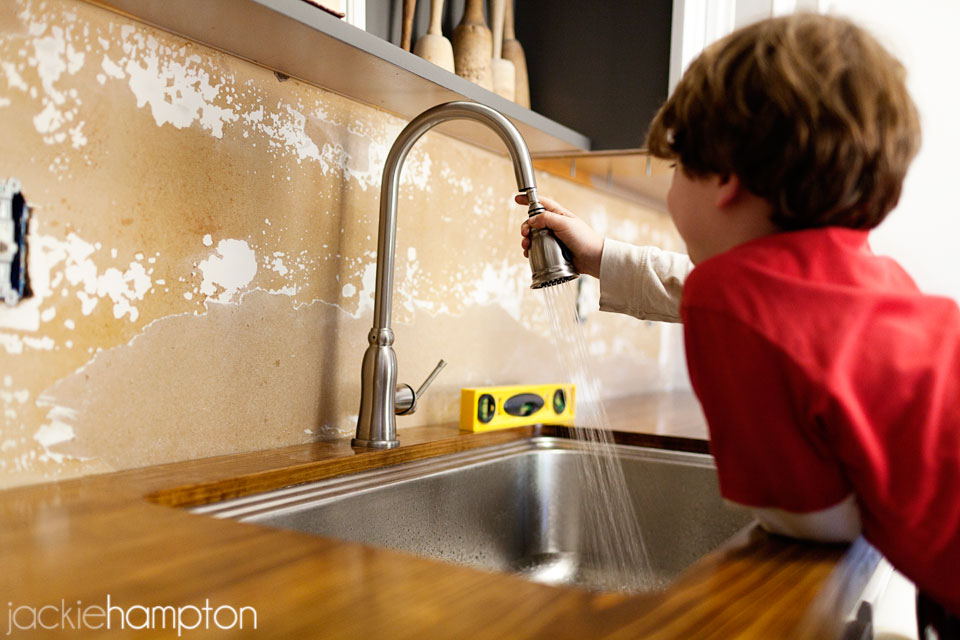 The kids were really happy to have running water in the kitchen again. I was happy to do dishes somewhere other than the bathtub. 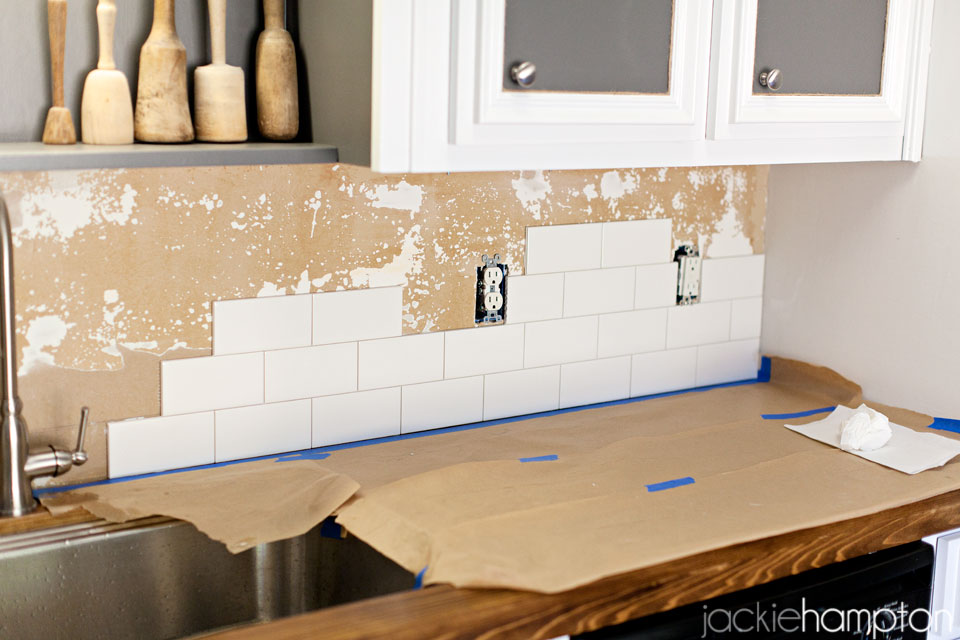 The following weekend we tiled the backsplash. I’m really digging subway tiles right now. They’re cheap, simple and they go with everything. 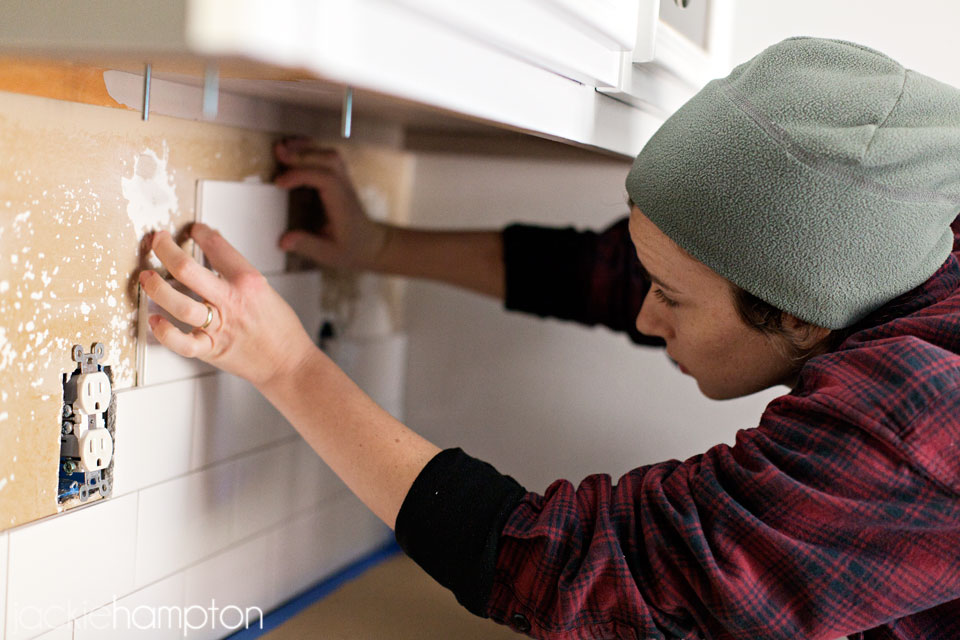 Here’s photographic proof that I dress like a lumberjack while tiling. 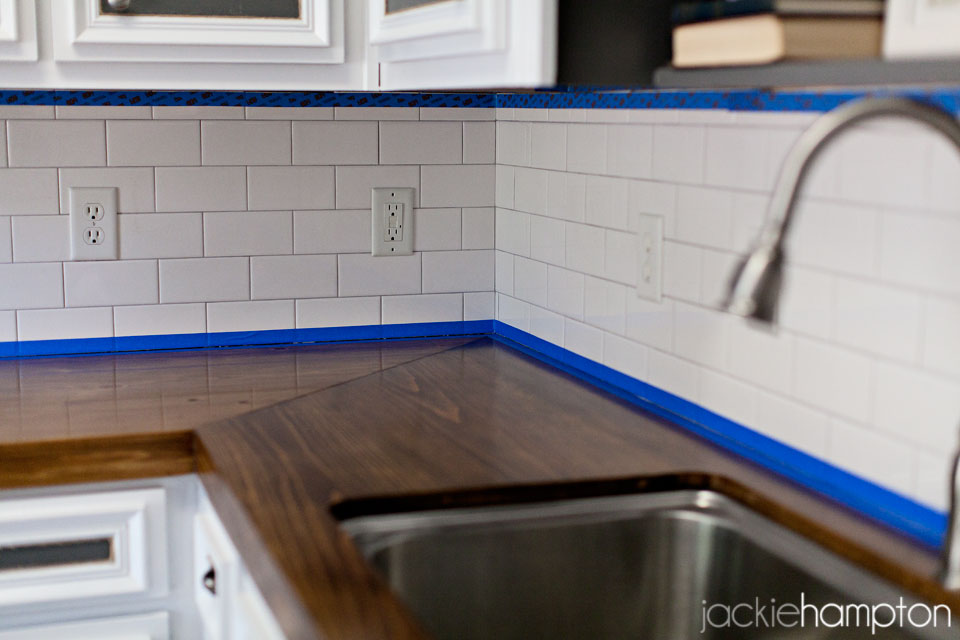 Compared to the other aspects of this kitchen, the backsplash went quickly. We grouted the next morning and caulked the seams to finish things out. 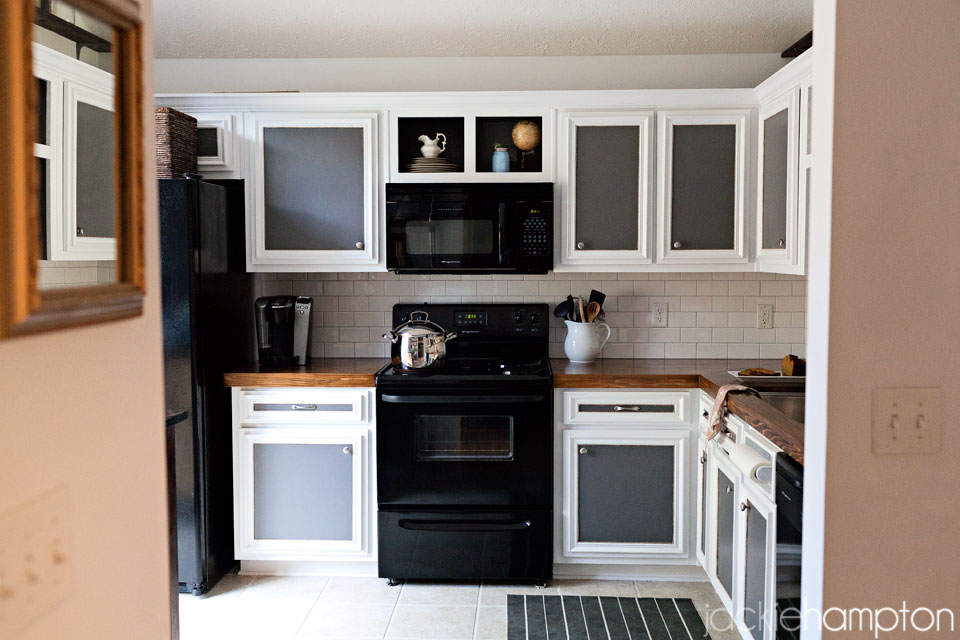 Common sense tells me the kitchen isn’t larger, but it feels huge without the expanse of brown laminate. And the separation between backsplash and counter is wonderful. I no longer feel like dishes are being sucked into a dark abyss. 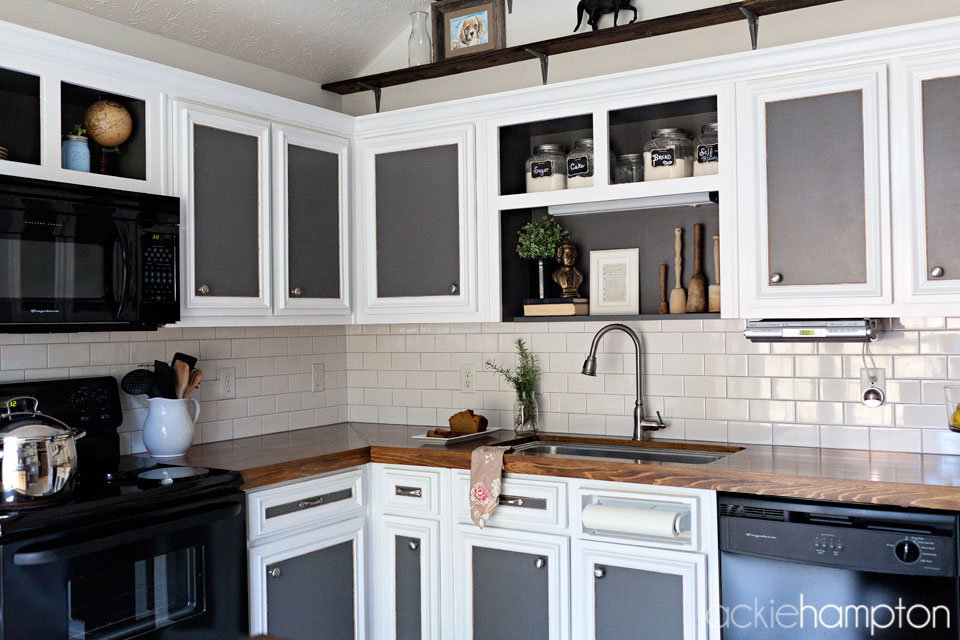 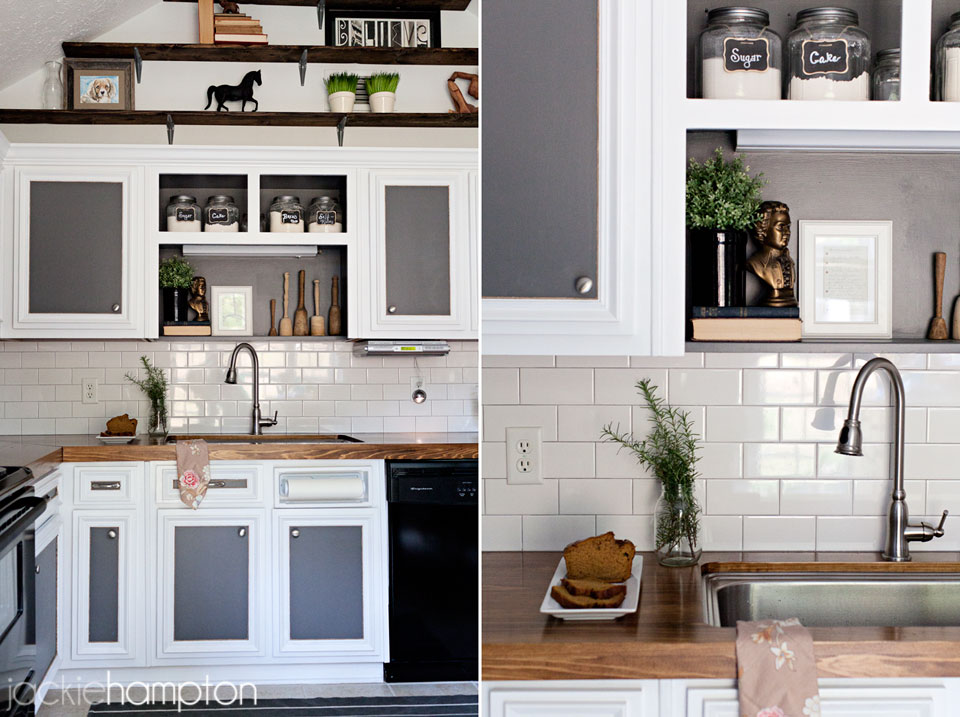 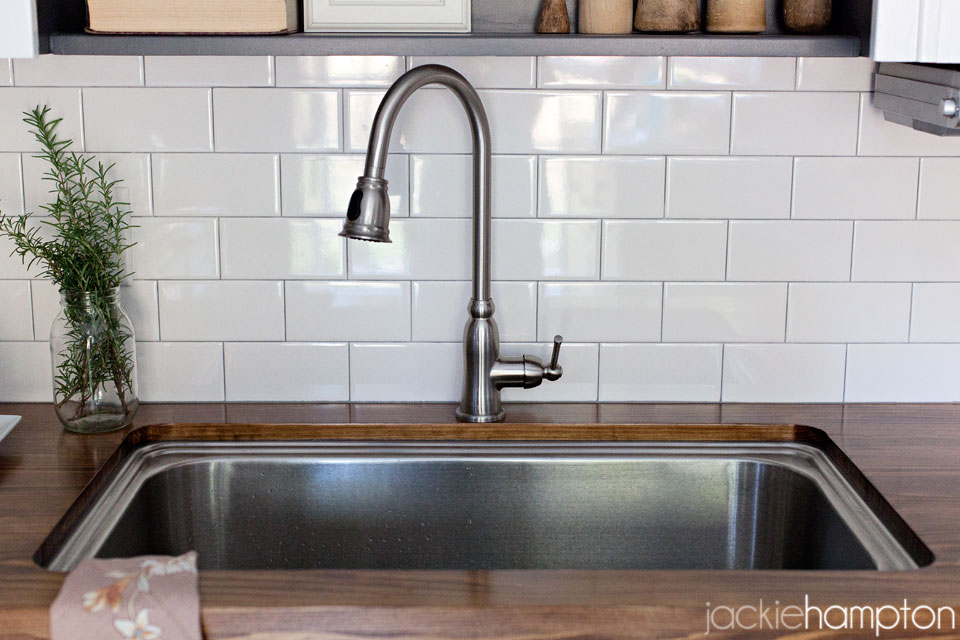 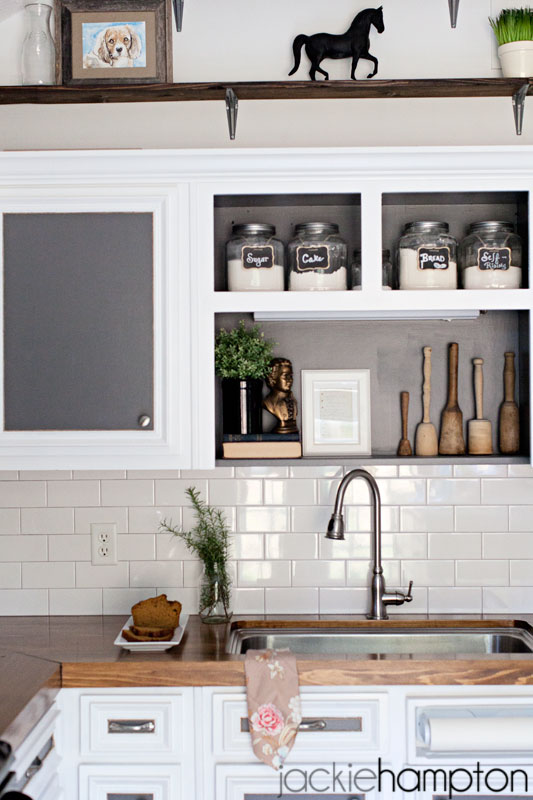